Jeremy Begbie is stealing my ideas! 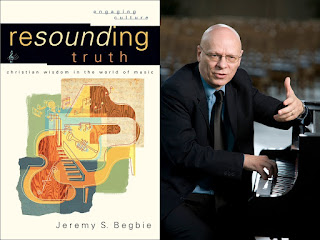 A few years ago I had the privilege of going to seminary (Garrett Evangelical Theological Seminary) and the particular program I was in required the writing of a Master’s thesis. Essentially, I had to become somewhat of an expert on a topic of my choosing and then write about it. My main interests were in art, music, and worship and so I ended up writing a theological understanding of music. Other than my thesis advisor (the wonderful Ron Anderson) the one person who helped me write my thesis more than any other, that is, who gave me a bedrock of ideas to draw from was the British theologian Jeremy Begbie. If anyone is interested in the arts and the Church, but especially with music, this is an author you must get around to reading.

So, a few months ago when I was checking out Image Journal (a publication that deals with the arts and faith) I was happy to see that their featured artist of the month was Jeremy Begbie and that they had posted a new interview with him. That interview, which I recommend reading as an introduction to his writing, can be found here.

At the end of the interview I read something that piqued my interest. The interviewer asked Begbie what his next book will be about and this was his response:

I am fascinated by how theology—a verbal discipline—handles (or doesn’t) nonverbal media like painting and music. So I am writing a book that tries to steer a course between a word-obsessed Protestantism on the one hand (the idea that if it can’t be adequately stated, it can’t be true) and a sort of floating aestheticism on the other hand (“paint it, sing it, but don’t spoil it with words”). I’m convinced this is one of the biggest challenges facing the church at present in a cultural context that relies on highly sophisticated nonverbal communication: how can we do justice to the potential witness of media without words while still believing that God has taken human words into the very center of his purposes?

I was shocked. This very subject was something that I had dealt with specifically in my thesis. One of my greatest interests is trying to understand why we sing, as humans in general but specifically why the Church sings. That is, why not just give sermons and pray unadorned prayers? Why do we sing to each other about who God is and why do we allow our prayers to be carried by a beautiful melody? What is it about the combination of words with music that is so much more powerful than just having words by themselves and a piece of music by itself? Most Christians live in a very "word-obsessed" culture (logo-centric, if you will) where the meaning of our words is prized far above our music, our art, our ritual actions of worship, and even the way we live out our faith. This mentality is summed up beautifully by the arist Robert Hodgell in his work "Sermon." 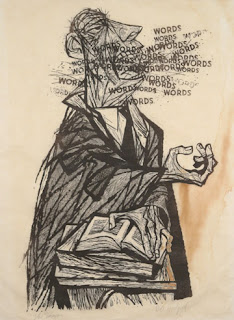 Needless to say, the issues Begbie was bringing up are issues I have been thinking long and hard about for several years now.

It then became clear to me: Jeremy Begbie was plagiarizing my work! He had gotten onto WorldCat.org (a massive online catalogue), typed something like “incarnational music” into the search engine, found the listing for my thesis (which can be found here), and then acquired the thesis through inter-library loan. I knew he had read my work and was now passing it off as his own! A world class theologian was deceptively using ME as his ghostwriter. This was a stunning development.

Actually no, that was not the case. I would be really flattered if Jeremy Begbie actually was plagiarizing my work, but the truth is that any original idea I thought I had probably came from Begbie to begin with, along with all the other works I read for my thesis. And actually, in reading the above quote from the interview I realized how much I have learned from him and others and how their works had seeped into my psyche and had now taken root as my own thoughts.

So really, I have not written this post as a way of exposing the alleged corruption of this brilliant theologian, but to instead introduce people to his work. I am also very excited to read his next book whenever it gets released, and maybe, just maybe, I will be fortunate enough to be mentioned in one of his footnotes!

Resounding Truth: Christian Wisdom in the World of Music—A great introduction of his thoughts on music

Theology, Music and Time—A more academic approach to his thoughts on music.

For the Beauty of the Church: Casting a Vision for the Arts and Beholding the Glory: Incarnation Through the Arts—these books contain great chapters by Begbie on music and the arts.

Resonant Witness: Conversations Between Music and Theology—A book I have yet to read of which Begbie is one of the editors and one of many contributors.

Voicing Creation’s Praise: Towards a Theology of the Arts—Begbie’s more academic thoughts on the arts and aesthetics

Posted by PostConsumer Reports at 21:44

Chris, As you know I am involved in worship. We just did the Open My Lips chorally as an introit. I am working on writing songs and have really begun a journey looking for deeper and more real worship... not that I have not experienced God's supernatural grace in the past.

Another area that I have been exploring is "Storying the Bible". It is used in missions in oral cultures but also as the basis of small groups in the US at places like Real LIfe Ministries. There is something about picturing the stories that changes your perspective and not just your propositional beliefs. You really engage your mind to visualize the stories. For example in our group, we storied Genesis and Exodus. Despite having some who were quite well educated in our group (e.g., a leader of Wycliffe translation group and Bible scholar), this made it come alive. Now when I read the Psalms there is a more personal connection to the events of the Exodus.... to which the Psalmist often refers.

I mention storying because it is word oriented in a way but involves a lot more. Sometimes other arts can be used in the process of story telling. Clearly the liturgy that retells the story is one way, but also learning to actually tell the story and bring it alive is another way.

Chris, I just noticed that Jeremy Begbie is actually at Duke.. I live in Durham and went to Duke. I will definitely check him out.

Thanks for your comment Ray. I've never heard of "Storying the Bible." It sounds like it'd be an interesting group experience. St. Basil said that icons were like a sermon for the illiterate, a quote I like a lot.

I think that's great you live where Begbie's at. He used to be at Cambridge and I toyed around with the idea of getting a Phd and studying with him there and I've thought about studying with him at Duke if I could get into the program. However, I don't think my wife could handle me doing anymore graduate school! I'll just have to settle for his books.