What Really Annoys Me About This Whole Duck Dynasty Debacle 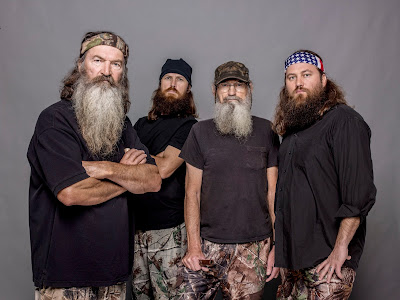 I know next to nothing about the show Duck Dynasty and I would like to keep it that way.  What little I do know has been gained merely through ever-present media saturation.  How else would I even know that they had released a Christmas album?! (??? and !!!).  Actually, I believe my lack of knowledge gives this blog post strength.  I have never seen the show and I have not even read the interview that got Patriarch Robertson fired.  I care very little about all of it.

Here is what I do care about though: I am seriously annoyed right now.

And here is why:

1. I am annoyed that "'reality' television" exists, that it is a thing, that people like it, and watch it.  I am annoyed with all the tactics of these shows.  I want it all to go away.

2. I am annoyed that they tend to make these shows about societal freaks and oddities, even nice freaks like the Robertsons.

3. I am annoyed that an uppity publication like GQ chose to interview the Robertson family, and so obviously asked them questions about homosexuality in an attempt to get them to say things that make them look like bigots.

4. I am annoyed that he actually answered the question(s).  That he did not just keep his mouth shut about that certain issue and move on to another question. I mainly annoyed because he failed to realize that people were going to get really upset at him if he said anything negative about homosexuality.

5. I am annoyed that people have gotten so offended at his words.  He has said nothing new that either Christians or backwoods-type (the two should not be conflated!!!) people have not said before.

6. I am annoyed that people, both viewers and network execs expect a group of people on a reality show to have the exact same views as they do, as if everyone has to adhere to some societal norm.  This is especially annoying since there is really nothing but freaks on these shows, freaks who often act really immorally and have that immorality flaunted and exploited by now all of a sudden morally righteous network execs.  Man, that is annoying.

7. I am annoyed that people are up in arms about a 21st century American network firing (or putting on hiatus) a "character" for not expressing politically correct or whatever views. It is so obvious the cultural tide has shifted on homosexuality.  People need to start accepting this.  Why in the world do we not expect networks to not tow the line of public opinion? If we are going to stand against what is most widely accepted we need to learn to navigate those cultural waters better.

8. I am annoyed that "conservative" Christians have so vehemently defended Mr. Robertson, as if all of this is as serious as some Reformation martyr being burned at the stake. I am annoyed at all the whining about the "gay agenda" et al, when there is really so much Kingdom work to do.

10. I am annoyed that I have to keep reading everyone's opinions about this situation, regardless of what side of the issue they fall on.  Thus, I am now very annoyed with myself. UGH.

Needless to say, I am seriously seriously annoyed.

And what's even more annoying is I have chosen to go on a no duck hunger strike until all of this gets put right.  That's right.  You heard it here first: I will not eat duck again until justice is had and everything is made right! (everything contained within all of my points in this blog that is, #'s 1-10)
It is going to be difficult but I will suffer for this!

Annoyance honorable mention:
Duck Dynasty made a Christmas album?!  The mere thought of that is annoying.

But wait! If you really want to be annoyed, and I mean REALLY annoyed, go an read about these things:

2. The imprisonment of Pastor Saeed Abedini.

3. The massacre of Christians in Syria.

5.  All this is taking our focus away from worshipping Christ at Christmastime.

5. Oh yeah, and our government is spying on us.

Posted by PostConsumer Reports at 21:21

I'm annoyed that people are saying his constitutional right to free speech is being trampled.