You can cry, I won't go
You can scream, I won't go
Every man that you know
Would have run at the word go...

The song portrays a monogamy not of monotony but of passion and fighting and undying commitment.

But not everyone thought so. Chris Richards, from the Washington Post, thought Reflektor as a whole demonstrated a band of "gigantic dorks with boring sex lives." Richards hated both the lyrics and music of Reflektor, mostly because the former are passionate but abstractly vague and thus unfulfilling and the latter pay too much of an homage to the past without creating anything compellingly new. Oh, and he thinks they are pretentious too. Well so be it.

I can't help but think Richards is missing something, especially about their "boring sex lives." I would venture to guess their sex lives are anything but boring, if "Porno" is any indicator. Now the song certainly isn't about the marital relationship between the band's frontman Win Butler and singer Regine Chassagne, but is instead part of a more general parable about falling in love, breaking up, and facing death being told on the second disc of the album. Nonetheless, Butler has certainly injected many of his own principles into the song, making one of the most compelling cases for monogamy in contemporary art that I can think of. The song though, despite its high view of relationships, committed love, and sexual pleasure is rife with conflict and hurt. Apparently, this relationship is on the verge of ending and there is nothing the man in the song can do about it.

It begins with a musical misnomer or red herring. The chintzy synthesizer coupled with the song's title have a titillating effect, almost as if it's the intro music to an actual porno flick. But its use is ironic. After entering into the song we quickly realize we're a fly on the wall to a situation far from the idealized and fabricated sexual utopia of pornography. We observe the breakup as it's occurring with a long silence between the lovers ensuing. They thought they knew each other, but now that they've really gotten to know each other...man...they just don't know how long they can keep this thing going.

But there is a subtext to this song, a theme pervading and defining every moment between the man and woman, a cultural context on display right there in the song's title. Paralleling the man and woman's struggle to stay with each other is our culture's ongoing fight with pornography and whether or not we will succumb to it. The underlying question of the song then is this:

When it comes to sexual pleasure will you settle for the image of a person or will you pursue actual flesh, blood, emotion, and spirit?

One of those things (the pornographic image) will always be there for you but never love you back. The other thing (the real person) you can feel, taste, and touch. You can talk to them and bond with them and live a life together, but they will also cause you great pain and might even leave you. In fact, either way, it is a certainty you will someday be separated from each other, for your deaths are inevitable.

This is the underlying problem of the song, but the real point is this, a point that is more than jarring coming from within our culture who seems to value instant self-gratification over anything else:

All the pain is worth it. To have known and be known by someone. To embrace and be embraced. To share a life. Any subsequent pain and heartache is worth it, so long as you were with somebody, so long as you loved and were loved by them.

It is not clear who the man and woman in the song are or what has transgressed between them, but it is obvious the relationship is in crisis. Perhaps the woman has just discovered the man's pornography addiction (which is less likely to me) or perhaps the woman is a pornstar/stripper and the man is her boyfriend/husband (more likely to me, although it doesn't have to be either of these situations—the song could very well be about any relationship). In the latter scenario the woman is merely an image to the rest of the world, an object of desire to everyone who is just "staring at a screen", to take a line from the song "Reflektor". But the man in the song knows and wants the real person behind the images on the screen (or up there "on a stage"). He pleads with her to take her makeup off, claiming "I got to see you, hear your sacred sighs," and "I got to find you, before the line is lost." And then, knowing all the pain he has caused her (whatever that might be) he lays before her his undying commitment: "You can cry, I won't go, you can scream I won't go."

And here we have one of the boldest statements advocating for committed (dare I say covenantal) relationships in modern song. In an age where disposable relationships are the norm and many avoid relationships altogether seeking the immediate pleasures of our screens, here we have a man willing to stay with the woman he loves, despite all the hardship and pain they have put each other through. In some senses the specifics of this toxic relationship hardly matter, for his commitment to her is what is central to the song. He wants her. He really wants her. The real her. Every other man "would have run at the word go," but not him. He'll stay with her no matter what—if only she'll have him.

We come to learn the relationship does indeed come to an end, with the man entering a kind of "afterlife" in his relationship with her in the last two songs of the disc ("Afterlife" and "Supersymmetry"). But even so the risk was worth it. He didn't succumb to the inaction of the Reflective Age, who values a passive, reflective (in the sense of someone "reflecting" on an idea) understanding of sexuality and intimacy displayed in those who masturbate to pornography. Instead, he acted on his passions; he pursued the woman of his affections even though he lost her in the end. At least he didn't settle for the pathetic lie of the image, a twisted simulacrum of intimacy. He rebelled against the passivity his Age and pursued the real thing.

And why did the relationship end? The narrator never reveals the details and maybe that's not what is important here. Perhaps the surface reasons the man and the woman had to breakup are as boring as the reasons why everyone breaks up. Instead, Butler peers beneath the surface of the relationship, giving us clues to the reason for their demise in other songs on the album. The album's opening track "Reflektor" has another narrator (is it the same narrator?) searching and searching for his love but is unable to find her: "turns out it was just a reflector (just a reflector)." And it would seem the world he is living in is to blame for this: "Our love it skips, on little silver discs/Our love is plastic, we'll break it to bits/I want to break free, but will they break me/Down, down, down?" Everything about his world ("this is their world where can we go?") makes his pursuit of love and his lover a vain pursuit. 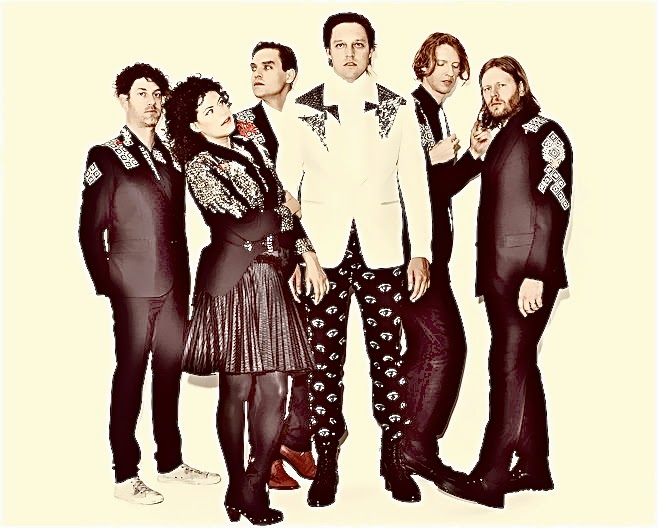 This is the same world portrayed in "Awful Sound (Oh Eurydice)", a world that devours and destroys Eurydice. This world kills her and take her away from Orpheus. He pleads with her to leave them all behind and never go back, but it's too late, she hits the ground and is taken from him. It's all over too soon. It's impossible to escape. To live within the world of the Reflective Age means to either succumb to it or to forever, consciously be rebelling against it. And it's difficult to always live in a state of rebellion. We eventually tire and seek to settle down somewhere; to find peace and normalcy. I believe this is where we find the man at the end of the album in the song "Supersymmetry". His beloved has been taken from him and now we find a man who has basically given up, choosing to live in bed reading books and leaving behind the memories of her. He has succumbed. No longer is he pursuing love. Now he is a reflector like everyone else, reflecting on love rather than actively pursuing it.

Maybe this dismal end isn't where the album finishes, but it sure seems to. I don't believe the man has given in to replacing his love through pornography, but it does appear his books and his imagination are filling the hole left by her. Perhaps there is an implication here that any time we seek a fake kind of pleasure, any time we substitute a false intimacy or a pseudo-love for real intimacy and love, there is a kind of pornographic act taking place, exchanging the Good for that which is void of Good. But I don't think this is necessarily the case for the man. He is simply living in the aftermath of this failed relationship. He is trying to cope with the everyday-ness of life in her absence. We should not forget or fail to take seriously his words in "Porno": "LIttle boys with their porno/They don't know what we know/Never know what we know." She may be gone and their relationship a thing of the past, but what they had was real. It was an event and they shared it together. And together, despite the pain they caused each other, they entered into a realm of human experience far beyond what those who only know "love" (or should I say release?) from looking anonymously at images on a screen.

This relationship is something he can't just "get over." The memory of her lingers for the remainder of his life. She will always be with him in some way. This is deeply painful but it is a pain that rests in knowing that at one time he was indeed loved. It is through both his pain and his love that he knows he is still alive. This is a far more human experience than what those "little boys" will ever ever know.

I really enjoyed reading this, gave me much more insight into these beautiful songs.

Such a gorgeous article. Today, this song hits hard. Ultimately I feel it's about believing in something you think is so right but it is fleeting no matter how hard you try. Ugh. Love this article and love this song.