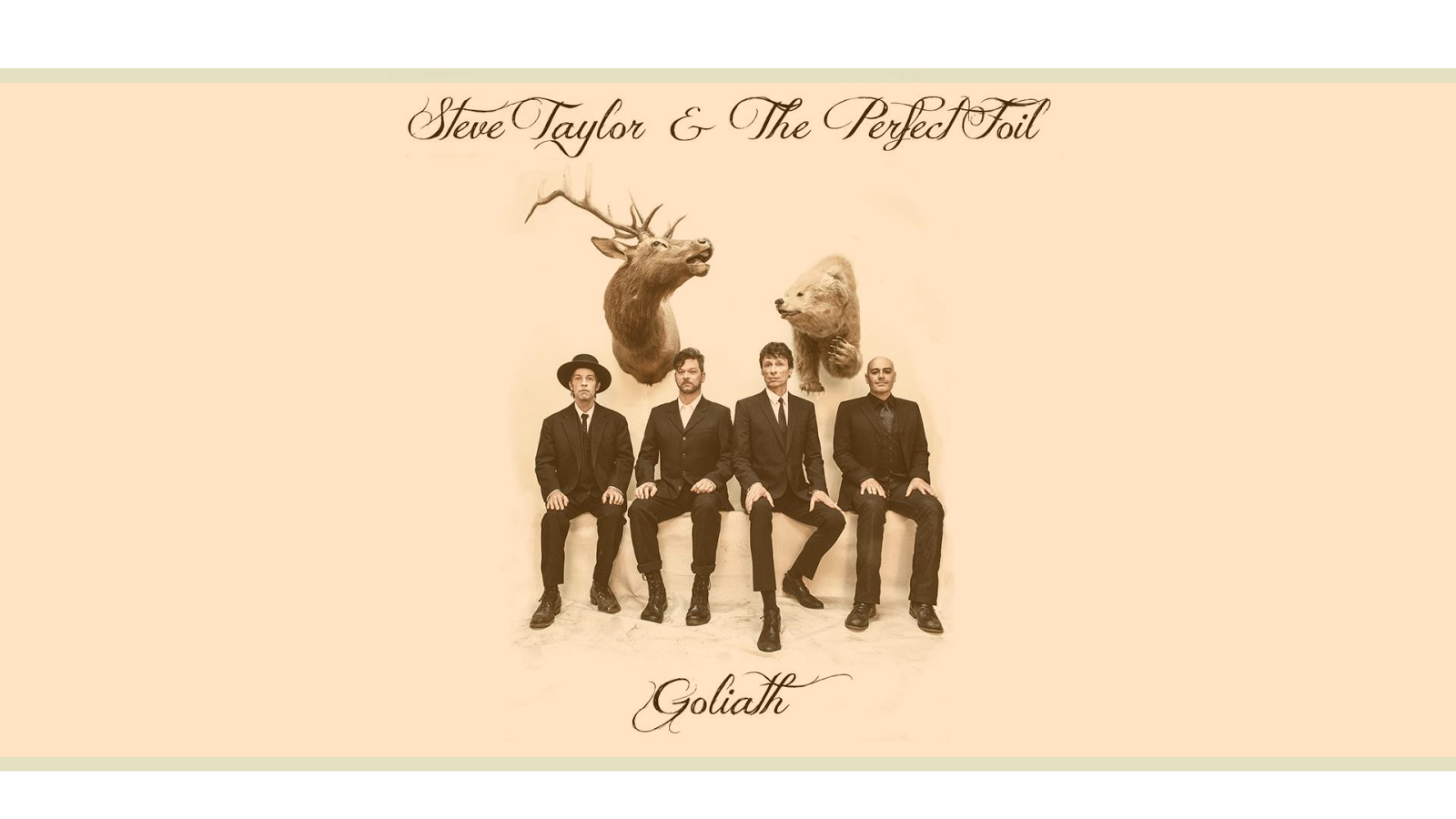 Steve Taylor & The Perfect Foil release their new album Goliath today (you can purchase it here on itunes and Amazon). I've very much been looking forward to this album since they announced their Kickstarter campaign last winter. But really I've been looking forward to this album for over 20 years. Taylor's released two songs ("Shortstop" from the Roaring Lambs album and "A Life Preserved" from the Blue Like Jazz soundtrack) since his last proper album Squint from 1993. This means us fans have been salivating unsatiated for years upon years, left perpetually mumbling to ourselves "When Steve, when?". I mean, Taylor even had the audacity to launch his own record label in the mid 90's (also called Squint) and did not even release one of his own records on it. The nerve.


In fact, even the prospect of this supposed new album leaves me a bit nervous, as Taylor has seemed to have the anti-Midas touch throughout his career. He seems to have the profound ability to make great art that a bunch of people love only to have it all blow up in his face before he reaches any amount of enduring success: from the short-lived Chagall Guevara, to his record label (which had some of the best bands around, had some great success, and still had to fold), to his somewhat successful and yet basically unrecognized filmmaking career which he now appears to be on hiatus from. Taylor's life work is this fascinating amalgam of being successful while also failing, of being nearly universally loved but also being vehemently hated and misunderstood by a concentrated few (while everyone else didn't even know what to make of him).

Personally, the first time I ever heard a Steve Taylor song (from what I can remember) was while watching Z TV, the 1990's CCM equivalent of MTV, and "Jesus is For Losers" from Squint came on. I had never heard anything like it—I mean, why in the world would a Christian be saying something like that in a song? I knew something was up. This guy was mysterious and odd, but he was also rebellious and provocative in a Jesus kind of way.

It didn't take me long to buy Squint from my local Christian bookstore and from there I went on to buy his greatest hits album Now The Truth Can Be Told and even that one Chagall Guevara album.

I would say Taylor is more than an artist I like. He is someone who has shaped the way I look at the world. He's helped to form my Christian faith and also my sense of humor. I'm pretty sure it was through Taylor's work that I first realized satire was a thing, a playfully serious modus operandi for getting a message across. And thus with this new album comes a few expectations for me, some things I'm really wondering about and hoping for as I await the physical album coming in the mail (yes, I still do that). I've heard the singles they've released so far but to be honest I haven't given them a real close listen yet. I like to digest a work as a whole while holding the CD or LP jacket in my hands. To me albums need to be experienced in their fullest.

So, here's what I'm wondering about:

1. How eclectic will the music be?
One thing I've always loved about Taylor's music is that it's hard to pin down into a single genre. Sure his early stuff was pretty new-wave and his later stuff fit into the grunge rock of the 90's, but he always threw in songs whose sound came out of left field. As an example, it's pretty hard to call Squint a grunge rock album when songs like "Bannerman", "Easy Listening", "Sock Heaven", and "Cash Cow" are also on there. So, here's to hoping Goliath is just as diverse in it's instrumentation and genre experimentation as the rest of his work. Knowing who is playing in his band gives me a lot of hope (He's got Peter Furler, John Mark Painter, and Jimmy Abegg with him, who are all virtuosos).

2. How funny will the lyrics be?
Really, I'm just hoping to laugh a lot. I really hope Taylor has been saving up all his best biting social commentary for the past 20 years and he's going to unleash it all on us. I will be sorely disappointed if his humor is not in full gear.

3. How controversial will the lyrics be?
I'm also hoping he says something to make somebody mad. I mean, what's the point of a Steve Taylor record if someone isn't getting a swift and brutal punch to the gut? I'd even take one for the team myself if it meant stirring up some controversy. Here's to hoping there's a song making fun of worship pastors on there.

4. How "Christian" will it be?
In revisiting his work over the past week one thing I've been utterly amazed at is how Steve Taylor has managed to talk about God and matters of faith throughout his career. He always seems to talk about the God stuff without ever sounding like he's pandering. He's incredibly clever about it, using different forms and expressions than are typical. In a recent interview Jimmy Abegg said the lyrics on the new album are a lot more masked spiritually speaking than they have been in the past for Taylor, and honestly, if this is the case, I'll be more than a little disappointed. I realize it's gotten a lot harder in recent years to know how to talk about God and Christianity—the reason of which I haven't actually pinned down (does anyone out there have any insight on that?). "Christian" music, to me, has seemed to either gotten too overt and syrupy (see Christian radio) or too abstract and I'm wondering who's left treading the transcendent middle road, a road I would hope Taylor would aim to be on. Believe me, I have no desire for Taylor to meet some kind of God or Jesus quota with his lyrics—instead I'm simply hoping the same guy who wrote "Jim Morrison's Grave", "On the Fritz", and "The Finished Line" has a few more mind blowing songs left in him.

5. Is this it!? What's next for Steve Taylor!?
Us fans can't just let Taylor release this album. NO! We have to immediately start pressuring him into telling us what he'll be doing next. Will there be more music or should we expect the next album in 2034!? Or should we expect another film to come out in 5 years? Maybe he'll just immerse himself in the prestige of the academic life in the decades to come. You know what Steve, why don't you just retire to a CCM-senior living center and write your memoirs already!?


Please enjoy this video of the song "Goliath" from the now released Steve Taylor & the Perfect Foil album of the same name.

You can purchase Steve Taylor & the Perfect Foil's Goliath on November 18th on
itunes and Amazon.

With those expectations, I think you're about to be disappointed. I know I was.

I'm curious - what did you end up thinking about the album? I love it and listen to it pretty frequently.

I think the music is pretty eclectic, though there's no Sock Heaven or Cash Cow. The change in tone from Only a Ride to Moonshot to Standing in Line is pretty significant. Lyrically, nothing struck me as too controversial, though Comedian was a pretty pointed poke at modern-day Pharisees and questioned whether the Church is abdicating its role as the voice of Christ in the world (at least that's how I read it). Overall, I would say it's a pretty "Christian" album, especially the songs Comedian and A Life Preserved.

Thanks for asking.
My overall opinion is it's a good-to-great album. It's not amazing, but I really like about every song on it.

Honestly, the best part of the album for me was Jimmy Abegg's guitar. Where has that guy been all these years!?

I wish Taylor's lyrics had a bit more bite to them, but oh well. There's a lot of good stuff on there. I don't think his songs about social media will hold up that well. They already seem a bit dated or a bit like a Newsboysesque Steve Taylor song.

But yeah, that's interesting about the whole "Christian" thing. I think it's more there once you get past the surface.

"A bit more bite"? Brother, "In layers" contains the hardest hitting lyrics of any song that I have ever heard. It's meaning is not obvious but if you dig into it... very deep, you will either agree or think Steve is completely nuts. It's your call.

I believe it's his best album to date with by far the most powerful lyrics.

Taylor's lyrics might need a little more bite, but oh well. There's a lot of useful information there. I'm not sure how well his songs on social media will stand up. They already sound a little antiquated, or like a Steve Taylor song from the Newsboys. I was a bit worried about the Obu Thesis Writing Service because I was looking since long time and wasn't able to fine any good one.