CULTURAL APPROPRIATION?
In the middle of Arcade Fire and Kahlil Joseph's new concert documentary The Reflektor Tapes I realized Arcade Fire was differentiating themselves greatly from U2, the biggest self-proclaimed Biggest Band in the World, even if the latter band grows increasingly irrelevant as the years go on.


Along with Coldplay, Arcade Fire are often the next likely candidate for BBitW. Coldplay, who swings back and forth between ironic self-deprecation and sincere aspirations to be the BBitW, are entirely too vanilla and unambitious to honestly be able to claim the title, even if they somehow continue to maintain a moderate output of decently good pop/rock singles into their 60's. Arcade Fire, on the other hand, are a serious band, who sing about serious things, and take themselves very seriously (or so it seems). In this way they have a lot more in common with their predecessors U2, even if they'll never sell half the amount of records as their elders. On the release of their 2013 album Reflektor one article quipped Arcade Fire was having their "U2 moment", meaning the circus-like atmosphere of their Reflektor stage show was reminiscent of U2's ZOOTV tour of the 90's.


Actually, the Reflektor tour did not so much resemble a circus as it did a traditional Haitian Carnivale, which looms large throughout The Reflektor Tapes. A good portion of the film takes place in Haiti during 2014's Carnivale, and much of the band's reflection on the making of the album lists Haiti as a prominent influence, somewhat in terms of musical style but mostly in terms of the heart of Reflektor and the history of Arcade Fire. Singer Regine Chassagne is from Haiti and her husband, singer Win Butler, has said he sees his relationship with Haiti as a life-long project of getting to know her people and learning how to help them.

And so, Arcade Fire's moment of U2-differentiation came as they were plunged right into the middle of Carnivale. There is a shot of them on a balcony over-looking a packed street with a parade processing through the center. There are people in outrageous costumes and there is uncontainable movement. There are a whole lot of black people celebrating (and dark skinned black people at that), and there is an awkward group of white people looking on, as outsiders. Arcade Fire did not take Carnivale over from the Haitian people. They did not make it about themselves. They looked on and allowed themselves to be the culturally marginalized ones, despite their default position as privileged, wealthy, white tourists.


Instead of merely bringing in a gospel choir to sing on their "gospel" song "I Still Haven't Found What I'm Looking Form" as U2 did in a much maligned scene of accused cultural appropriation from their film Rattle & Hum, Arcade Fire have (seemingly) taken the humbler, more long term approach of cultural immersion and mutual cultural exchange.


There are other moments in The Reflektor Tapes, this time where the band are walking amongst the people of Haiti. This time they have entered into the festivities and yet they still do not take over, they merely blend in (as much as goofy looking lanky white people can blend into a crowd of Afro-Caribbeans). It is almost as if the film is saying Arcade Fire does not matter to Haiti—Carnivale will go on with out them and there is nothing they can do to alter what happens there.

These moments of passive cross-cultural pollination, where the typically dominant culture (rich white people) simply lets the marginalized, impoverished culture be itself. They are not there to be their saviors, just to be present.

Still, there is another moment where the band is playing in front of a large Haitian crowd during Carnivale. The people, listening to songs they've never heard before and in a style unfamiliar to them, hardly engage physically with the music at all. The band plays on though (and well), even if the music has little effect on the people. It is another cultural exchange, one, again, where Arcade Fire do not really matter to the Haitian people and Arcade Fire are not even remotely upset about it.

Finally, there are numerous other moments during the film where true cross-cultural exchange takes place, this time more on Arcade Fire's terms. The band finds themselves on the streets of Port-au-Prince entering into making beats with street drummers. The band invites Haitian musicians into their recording studio to contribute to Reflektor's songs. The band takes the same musicians on the road and lets them sing one of their own songs. The band lives backstage with their Haitian troupe, one big happy family. Again, this is the more immersive, long-term approach.

THE REVIEW PROPER
And for this reason The Reflektor Tapes and Arcade Fire's general approach is refreshing. Yes the film is pretentious. It is an attempt at an art film by a rock band who is attempting some form of high art, even if it is only rock music. Like U2, Arcade Fire are much maligned for taking themselves so seriously, for being vocal about their causes (though I would argue Bono is a much more overbearing celebactivist than Win Butler—and I still like him), and for making music that people cannot dance to (which is not even remotely true of either band—well, maybe it is a little true of U2).

A lot of critics have called the film an oddly slow moving drag with lots of jerky edits, both visually and musically, in terms of cutting back and forth to different locations and from one song to another without ever actually ending a song. I know what these critics mean but I am not convinced their criticism is right. 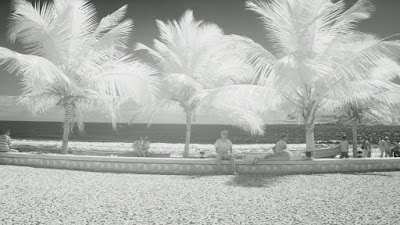 I think it is best to view the film like an impressionistic dream. There are many images in the film not of the band. We spend a lot of time drifting through Haiti, fixated both on the tropical and urban landscape, as well as on the faces and movements of the Haitian people. We also spend a decent amount of time looking at Arcade Fire fans and the spaces they inhabit when at a concert. Even during their recording sessions the camera often drifts, giving a sense of space and mood. Each shot is not necessarily about information but instead about meaning and beauty.

Thus, the film is wrapped up in providing us with many images, which I often find stunning. Some of the scenes from Haiti were filmed with an infrared camera, which gives the shots a bright, washed out, black and white look. I have never seen palm trees look that way. On a large screen the effect is pure radiance. Another effect was to place two shots on top of each other, with the shot in the background framing the shot in the foreground, both moving at once. This technique created slow moving somewhat surreal montages. One complaint is the film lacks a discernible plot—but I am wondering if they have missed a larger point in search of a narrative. As a band, Arcade Fire have been just as much about creating a certain feeling in their audience as they have been about telling stories. As a viewer I found The Reflektor Tapes an imagistic feast, and I think critiquing the film for missing a plot is itself losing the plot.

Another criticism levied at the film is the band's narrative voiceovers are half-baked pseudo-philosophical platitudes that do not actually tell us much about the band or their art. I would argue though that we are to interpret their voiceovers within the context of the visual story being told. Both are meant to be interpreted. Both carry meaning. I would also argue, using (if you will forgive me) a worn out platitude: often, less is more. Therefore, I think their voiceovers work well. I enjoyed hearing Regine share about her Haitian heritage, I enjoyed the concise explanation of how Kierkegaard factored into the album, and I enjoyed hearing the rest of the band (who are typically passed over in interviews) share their thoughts and accounts.

The Reflektor Tapes is not exactly a masterpiece but it contains compelling images, compelling songs, and is about a compelling set of people. I am sure Arcade Fire's detractors will find them no less insufferable in the film, no less unsexy, and no less guilty of cultural appropriation but I would argue they are a much more culturally savvy band than their arena rock predecessors U2. They know how to navigate between different musical and ethnic cultures and still create art that is their own.  In some senses The Reflektor Tapes does mostly exist for the already initiated Arcade Fire fan, but at the same time it can serve as a gateway into the ongoing artistic universe they have created.

Side points:
—I found the constant switching between songs sometimes off-putting and sometimes compelling. I missed hearing full versions of their songs but sometimes the way they were edited together, again like some kind of dream, was often strangely beautiful. Also, a number of the songs feature strange and rare mixes of their songs, most especially when they somehow got all the instruments to drop out except for a lone vocal or Sarah Neufeld's violin.
—The most haunting scene of the film came when the band were rehearsing in the abandoned mansion they rented on Jamaica. It shows them in the middle of a large mostly empty room tinkering obsessively on multiple analog synthesizer rigs, apparently in the witching hour of the night, with a sculpture and a faux-royal portrait with pink tape on their mouths and eyes, blindly watching over the proceedings.
—We get to see Will Butler beat his way through a drum head (which is kind of a thing he does) and then put it on his head. There seems to be something both cathartic and victorious in this staged, routine frenzy. I am glad they included it in the film.
—I particularly enjoyed watching Regine's process for making music. She is the kind of person who always seems to lose herself in the moment. She enters into the music fully, a person of immense imagination and passion. We see more of this side of her in the film than ever before.
—The new songs featured in the film are mostly excellent, with the Reflektor Deluxe EP definitely worth checking out.
—Perhaps the most disappointing part of the film was the way it ended, with Win Butler recounting the story of how they filmed the music video for "Porno." Butler talks about getting as drunk as possible, walking around a lot, and then getting in the back of an ambulance. And that's how it ends. I cannot imagine choosing to end a film at that point.
—If you are seeing the film in theatres stick around past the credits to watch an interview with Butler, Chassagne, and Richard Reed Perry. It's a bit Youtubey or DVD extra like, and I wished they would have added ten minutes to the actual film, but I still was glad to have seen it.

Posted by PostConsumer Reports at 13:15