Making a Case For Dark Comedy #4: Charlie Brown, Snoopy, and the Peanuts Gang

Yeah that's right. I just put the iconic "children's" character Charlie Brown and the humorous tales surrounding his dog and friends in the category of "dark comedy."

But think about it: the kid only gets rocks for Halloween and it's his own TV special. And did you ever actually see him kick that ball? Good old Chuck is nothing but the locus of perpetual derision and mockery from his friends and family. He is constantly failing at what he puts his efforts toward, finds himself disappointed in everything he puts his hopes in, and receives near unequivocal abuse from those closest to him. 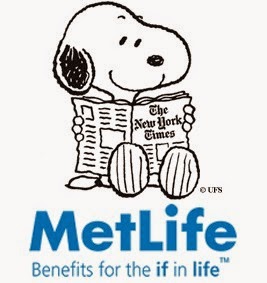 Peanuts and Charlie Brown is most certainly children's anti-entertainment. Where typical film and TV programming for kids continually bark out the warm-fuzzy truisms "Believe in yourself!", "Pursue your dreams and you can accomplish anything!", "You're special and there's no one like you!" Peanuts creator Charles Schultz seemed to be telling kids (and adults as well): "Sometimes—or maybe ALL of the time—no matter how hard you try and no matter how much you believe in something, you're still going to experience a whole lot of pain and disappointment. And really, the greatest enemy in life is Life itself. Life is about enduring cruelty and hardship and your job is to figure out how to navigate through it all."

Again, think about it: the product Snoopy and the gang are most known for helping sponsor is MetLife, an insurance company, because you never know when disaster could strike.

Which is to say, has anything more dark and brooding and fatalistic also been as universally lauded and loved as Peanuts? Does anyone else see the incredible irony of something as pessimistic as a little kid like Charlie Brown and his community being so deeply embedded into the American narrative ethos? Perhaps this is why Snoopy is often the more popular character—when we look too hard at Charlie Brown himself, he is too much of a downer. Too much does he remind us of our own foibles, of how we are never really all that happy, of how we are never quite good enough.

More so than any over-exaggerated Disneyfied villain could ever convey, Charlie Brown teaches us that life itself is the villain. In fact, the danger of Disney's ethos of villainery is it deceives us into believing people are out to get us and that we will face some great evil in the form of an arch-enemy bent on our destruction. We are deceived because we fail to see the universe we inhabit or the mortality we are always trying to outrun as the true enemy. Sure Charlie Brown surrounds himself with a cruelly insensitive bunch he presumes to call his friends, but isn't the real tragedy that he continues to find himself in a universe that supplies him with those kinds of friends to begin with and a disposition that forever finds him moving toward that football, hoping against hope that maybe it will still be there when his foot arrives and he will not fall flat on his back again, left to wallow in his humiliation and pain, left in the knowledge he is truly alone in the universe?

And before I start to sound too fatalistic or deterministic about the nature of our universe, Christian theology teaches us not that the universe has a mind which is consciously against us but is instead a realm subject to the consequences of a corrupted order: For creation waits with eager longing for the revealing of the sons of God. For the creation was subjected to futility, not willingly, but because of him who subjected it, in hope that the creation itself will be set free from its bondage to corruption and obtain the freedom of the glory of the children of God. For we know that the whole creation has been groaning together in the pains of childbirth until now (Romans 8:19-22 ESV). There is a lot to unpack in those verses, but needless to say the "groaning" of creation manifests itself often as being seemingly against those that inhabit it. What is more, Christian theology also teaches "the enemy" goes beyond a corrupted unconscious created order, but also a corrupted (and now conscious) spiritual realm: For we do not wrestle against flesh and blood, but against the rulers, against the authorities, against the cosmic powers over this present darkness, against the spiritual forces of evil in the heavenly places (Ephesians 6:12). Demons do not physically manifest themselves in Charlie Brown's world, but the voices of demons—voices of doubt, despair, hatred, and abuse—do sure seem to swirl about the boy wherever he goes.

Perhaps this all sounds a bit too much for a silly comic strip and that for kids to boot. But juxtapose Schulz's Peanuts with typical kid fare. Peanuts neither paints the world in monolithic rose-colored light or shields them from the harsh realities of adulthood. To take a classic example, Mister Rogers, who really did create ground-breaking television for children, never shied away from addressing tough issues on his show (divorce, death, disagreements, for example) and yet his approach often failed to address the absurdities and evils of the universe head on. He seemed to adopt a "power of positive thinking" or a "love conquers all" mentality. While there is certainly some merit to this approach it fails to acknowledge the evil and coldness of the world in which we live, that evil needs to be overcome and often with great force, and how often, in the moment we often feel engulfed by evil and entirely unable to overcome it.

Even so, one of the great problems surrounding the meta-narrative of Charlie Brown, as I see it, is that he always seems to be succumbing to (that is, becoming the victim of) evil rather than ever overcoming it. Charlie Brown is pretty much a masochistic hedonist. Too much does he love feeling miserable. 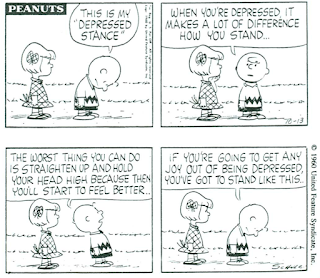 A lot of people have said in the 1980's and 90's Charles Schultz lost the plot with Peanuts a bit by getting too positive and feel-good, especially as he focused on Snoopy, rather than Charlie brown, more and more. That said, it has also been pointed out that toward the end of his life, especially as he learned he was terminally ill and he began to wrap the comic strip up, Schulz became increasingly melancholy, even with Snoopy. So even in the end he did not let his characters off the hook.

There is one thing you can be sure of: the entire universe is against Charlie Brown. The world often turns on Charlie without any intentional malice. It is a kind of blind cruelty. It just is cruel. The TV specials and films and most especially the comic strip are almost Kafka-esque in the kind of banal evil that is continually inflicted on Charlie Brown. The deck seems insurmountably stacked against him, with nearly every person in his life and even nature itself set to bring Charlie Brown down.

Everything in his world is a signal, a writing on the wall to its central character: nothing you do will be accompanied without a struggle, or, to quote a cliche, no good deed will be left unpunished.


To take some specific examples let's focus only on a number of scenes from the comic's first cinematic release A Boy Named Charlie Brown, all of them exemplary of either the cruelty inflicted on Charlie Brown or the cruelty of the world he inhabits:

There are two great "morals" to A Boy Named Charlie Brown, the first more generally relating to our place in the universe and the second relating more specifically to the pursuit of happiness and fulfillment.

The general moral of A Boy Named Charlie Brown, which can be taken as one of the major "morals" of the comic as a whole is that Charlie Brown was a failure...but when he lost that spelling bee the world didn't come to an end. In other words, he is not the center of the universe. The world's success or failure does not hinge on his success or failure. The world goes on without us.

The next "moral" is learning the lesson that when you are good at something, it is never as simple as being good at it, finding success at it, and enjoying it purely. No, there are always a multitude of burdens attached to whatever you are good at. A personal victory does not bring freedom to your life but instead a complex set of new responsibilities you previously could not conceive of. Thus, all the joy is immediately sucked out of your success. We see this happen with Charlie Brown when he wins the initial spelling bee. He is so happy to have won, only to come to find out he now has countless obligations: now he has to really study and get smart and cannot rely on his natural talent. Now he has to pay an agent to get his name out there. Now he has to take a trip. And so on. In so doing Charles Schultz dispels the myth of adulthood, which says "As soon as I ______ I'll be happy." That blank could hold numerous options: "am big enough," "smart enough," "strong enough," "have enough money," "have a house," "get married," "have kids," "have the job I want," "have the car I want," and on and on. What the parable of Charlie Brown tells us is what we think we want is not actually what we want. 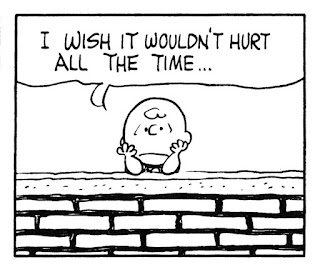 I could not imagine anything darker being portrayed on an "innocent" "children's" cartoon. Shallow fluffy stuff this is not. Through it all though, this sober look at the world is always juxtaposed with hope. Linus' wise naivete and philosophic ramblings, Snoopy with his brazened determination in the face of all obstacles, Sally with her bottomless love for Linus, Peppermint Patty's faithful intention to serve her friend, and Charlie Brown with his undying melancholy optimism even in the face of unending self-doubt. All this is strangely hopeful. It is a sad hope, but it is hope nonetheless.

I mean really, Charlie Brown's a blockhead but you've got to give him credit for trying.

__________________
For a more uplifting (and theological) take on the comic check out the book: The Parables of Peanuts. For a look into the complex faith of Charles Schulz check out the recently released A Charlie Brown Religion.

For more disconcerting ruminations on Charlie Brown and Snoopy check out these articles:
The Exemplary Narcissism of Snoopy
Kafka Meets Charlie Brown

Posted by PostConsumer Reports at 15:25