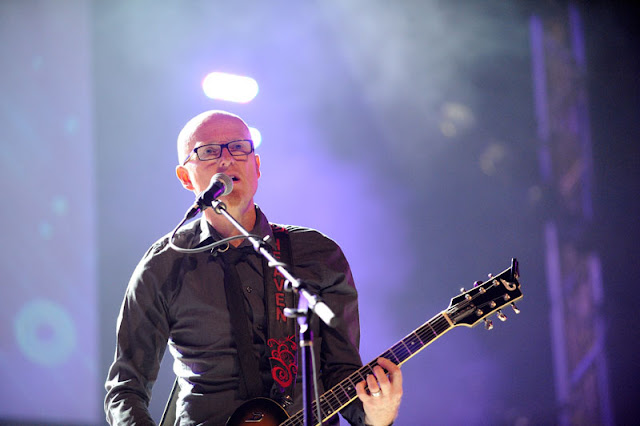 Yesterday I posted the 50th episode of the PostConsumer Reports podcast featuring an interview with Stu G on his new Beatitudes project. You can listen to that episode below, subscribe to the podcast on itunes or subscribe on any of a number of podcast apps

Yesterday was also Stu G's birthday and in celebration of his work as a guitarist and artist I wanted to offer 8 great moments from Stu's time with Delirious? I'm calling this "8 Times Stu G Melted Our Faces Off." I have selected one track from each of Delirious?'s albums whose guitars were worthy of that title. I have to admit, I could easily have selected about 5 tracks from each album, but in my opinion these are some of the most face-melting-off guitar tracks from Stu G's career. Enjoy the trip down memory lane or enjoy getting to know one of our great rock guitarists.

"I'm not Ashamed" from Cutting Edge
For those of us who grew up in the church, something just felt different about this mysterious British band who use to call themselves "the Cutting Edge Band". Sure, they sounded an awfully lot like U2, but it also seemed like they were working out their musical voice. "I'm Not Ashamed" isn't the heaviest song in their catalogue but there is a raw, desperate intensity to it, all of which is amplified by Stu G's guitar work in the second half of the song.

"Promise" from King of Fools
"Promise" was the least worshippy song from King of Fools. It's not worship music at all actually, but is instead an account of a soured relationship. Perhaps the thematic change allowed Stu G to let loose a bit, from the opening riff to the guitar solo.

"Bliss" from Mezzamorphis
Mezzamorphis was a statement from Martin/Stu/Tim/Stew/Jon that Delirious? had a new sound. It was harder edged, it was crisper, it was darker, and it also seemed like a conglomerate of a lot music being made in the late 90's, from industrial/electronic music to Radiohead. "Bliss", another song about relationships, is one of the most unique sounding songs in their catalogue. It almost sounds like a Stu G studio experiment that eventually morphed (no pun intended) into an actual song. Whatever it is, "Bliss" is certainly one of Delirious?'s hardest songs.

"Awaken the Dawn" from Glo
As a composition "Awaken the Dawn" is a straightforward, simple contemporary worship song. Stu G must have felt it was a little too "normal" and middle of the road, because he decided to add an opening riff to the song that melted our faces off. Honestly, I could have chosen a number of songs off Glo, from "God's Romance," to "Investigate", to "My Glorious", to "Hang on to You," but there was something so jarring and bold about "Awaken the Dawn's" main riff. It almost literally feels like it's on fire. Speaking of fire....

"Fire" from Audio Lessonover/Touch
Audio Lessonover/Touch is not one of Delirious?'s better known albums. Nonetheless, there are some killer songs in this collection, most especially because of Stu G's guitar. "Fire" burns with intensity, and is simply a killer rock song.

"Grace Like a River" from World Service
Though it's a close race, World Service is my favorite Delirious? album. In my mind, it's their tightest, catchiest collection of pure pop/rock tunes. As always, Stu G's guitar work is phenomenal, and though I could have chosen a number of songs, the opening track "Grace Like a River" is face-meltingly good.

"Now is the Time" from Mission Bell
"Now is the Time" (co-written with Matt Redman is a pretty typical stadium rock anthem for Delirious?. But notice Stu G's guitar work in the second chorus leading up to bridge. Martin Smith is still singing over top the music until the breakdown with the solo, but in the background Stu G (and the rest of the band) is letting loose. "Now is the Time" carries a huge sound, and for that reason it's one of Stu G's greater works.

Posted by PostConsumer Reports at 13:58