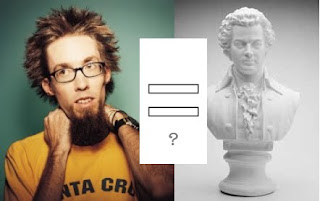 (the guy on the right is Mozart, by the way)

I have been listening to David Crowder Band's album Give Us Rest for two weeks now. In my last post I shared some concerns about what that album might include (and not include). Here is what I think about it all so far:

+++Brief Review--I certainly would not say this is a masterpiece, but it is definitely very very good and worth everyone hearing. It has the possibility of being a great work, but we will have to let time and the Church's judgment decide that. All the music is solid and despite its length nothing feels forced-in or superfluous. In response to my previous concerns, I am happy to say there are a number of congregation-worthy songs (i.e., we could sing them in church). Since DCB had to stick to the themes and forms of a requiem the lyrics on the whole are less abstract and have deep roots in the Church's liturgy (a factor which also contributes to making them more singable in churches).

+++On that whole congregational singing thing...--In listening to this album I have come to see the work of the DCB differently. In the past wanted them to just be a worship band that merely contributes new entries to the hymn and worship song canon. Instead, I now see how they have slightly merged congregational songs with art song. While their work never reaches the heights of the vast library of what might be called "Classically Composed Sacred Music," it seems over the course of their career they have evolved into an art-rock project that creates larger works of art out of which the Church can then use a few pieces from during their times of worship. So, in the same way that Mozart gave us his Requiem and Bach gave us his cantatas and passions, DCB gave us some innovative art-rock to God's glory and the Church's pleasure. It is interesting to me that DCB's progression parallel's that of the Church's music, that is, from simple music (think monophonic Gregorian Chant, or DCB's first 2-3 albums), to larger more complex works that are not accessible to the common musician (think sprawling polyphonic orchestral works and DCB's concept albums).

+++Roman Catholic Anyone?--So, it has been made clear that this is a Requiem Mass, but as far as I know neither Crowder himself or anyone in his band is a Roman Catholic. Now this is fine--anyone can take any artistic form they like and make it into whatever they like. But surely there were some aspects of the mass that conflicted with Crowder's Baptist/Evangelical background. I know one song in particular, "Blessedness of Everlasting Light," is explicitly a prayer to God to forgive their sins of the dead. There are a lot of theological implications here, namely that basically all Evangelicals (and I use that term in the most generic sense possible) do not pray for their dead relatives and do not believe in the Purgatory they would supposedly be attempting to pray them out of. What I am wondering is if Crowder had any conflicts with the Catholic material he used as his base source and if he censored or watered down anything in his composing process? All this makes me want to become more familiar with the requiem liturgy so I can know how it fits with what Crowder did here. I do know I am not the only who has noticed this tension as both a Reformed and a Catholic blogger have written about it, the latter even going so far as to ask Crowder to join the one true church in Rome!

+++Easter Eggs!--DCB has been know for hiding Easter Eggs and inside jokes inside their albums. The album art for Give Us Rest features alternate versions of the covers from their previous albums, and many of the songs echo similar themes from previous albums (e.g., there's lots of "light" imagery a la Illuminate and lots of "death" imagery [of course] a la A Collision of which Give Us Rest is a companion album). I am sure there must be a lot of musical and lyrical parallels they cleverly put in for the discerning listener--I just hope I am smart enough to find them. I am sure some blogger has already gone through and found them all.

+++One Complaint--As someone who worships in what might be called a "liturgical" setting I was disappointed that Crowder did not leave us any actual Ordinary music for us church musicians to use. Besides the Kyrie Eleison, he does not use the exact liturgical texts, which is kind of a big deal for us liturgical types. For example, in the songs "After All (Holy)" and "Oh Great Love of God" Crowder buries sections of the Sanctus and the Agnus Dei in amongst his own lyrics. Now, both of these songs are pretty good and I would seriously think of using them during worship, but I would be all the more likely to use them had he stuck to the set texts. My disappointment is that he did not actually give us a new setting of the Sanctus or Agnus Dei, but rather new songs that reflect the themes of those liturgical texts. But hey, I realize this is the difference between someone who is writing solely for congregational work and someone who is trying to create their own separate work of art.

+++Genre Chameleon--I had a friend (the immortal Robbie Augsburger) who once said that people just did not put a bunch of different sounding songs on albums anymore, that albums tend to all sound the same nowadays. He referenced The Beatles’ ">Revolveras a great example of this, where every song had a unique sound, drawing from different genres and yet forming a cohesive whole over the course of the entire work. Well, his criticism certainly cannot be attached to DCB; over the course of their career they have explored many different sounds and genres and all of them find a prominent place on this final album: anthemic worship (obviously), quiet ballads, bluegrass/folk, pseudo-Trans-Siberianesque metal, (somewhat) classically composed choral and orchestral arrangements, pop punk, electronic/dance, and--a genre I think they are either an originator or perfecter of--what I would label “dance rock.” DCB takes us so many places over the duration of Give Us Rest, and yet nothing seems out of place--they manage remain true to their underlying sound and musical intuitions. The songs that tend to take up the core of their sound--electronically accented anthemic worship with a pop punk bent--start to sound the same after a while (and over the course of a 34 track album there are quite of few of them), and yet they still manage to be excellent songs in their own right. They have great melodic hooks and the lyrics are usually above standard.

+++Post DCB--In the Christianity Today interview Crowder said he's definitely going to keep making music, but I do not see how he can keep on making music anything close to this ambitious without his team behind him. Basically everyone in the band shared writing credits on this album, and it is clear to see that each member adds a lot to DCB's overall sound. Where does Crowder go from here? Release stripped down acoustic worship albums, discover his singer-songwriter side, become a bluegrass and folk superstar, or just quietly lead worship at a church somewhere? I am very curious to find out.

Please enjoy this video where Crowder and bandmate Jack Parker talk about the album a little:

Posted by PostConsumer Reports at 22:18

Good blog post Chris. I appreciate your thoughts about a very interesting and complex musician. Maybe I can get him to come and lead worship for me at my small church in KC?!