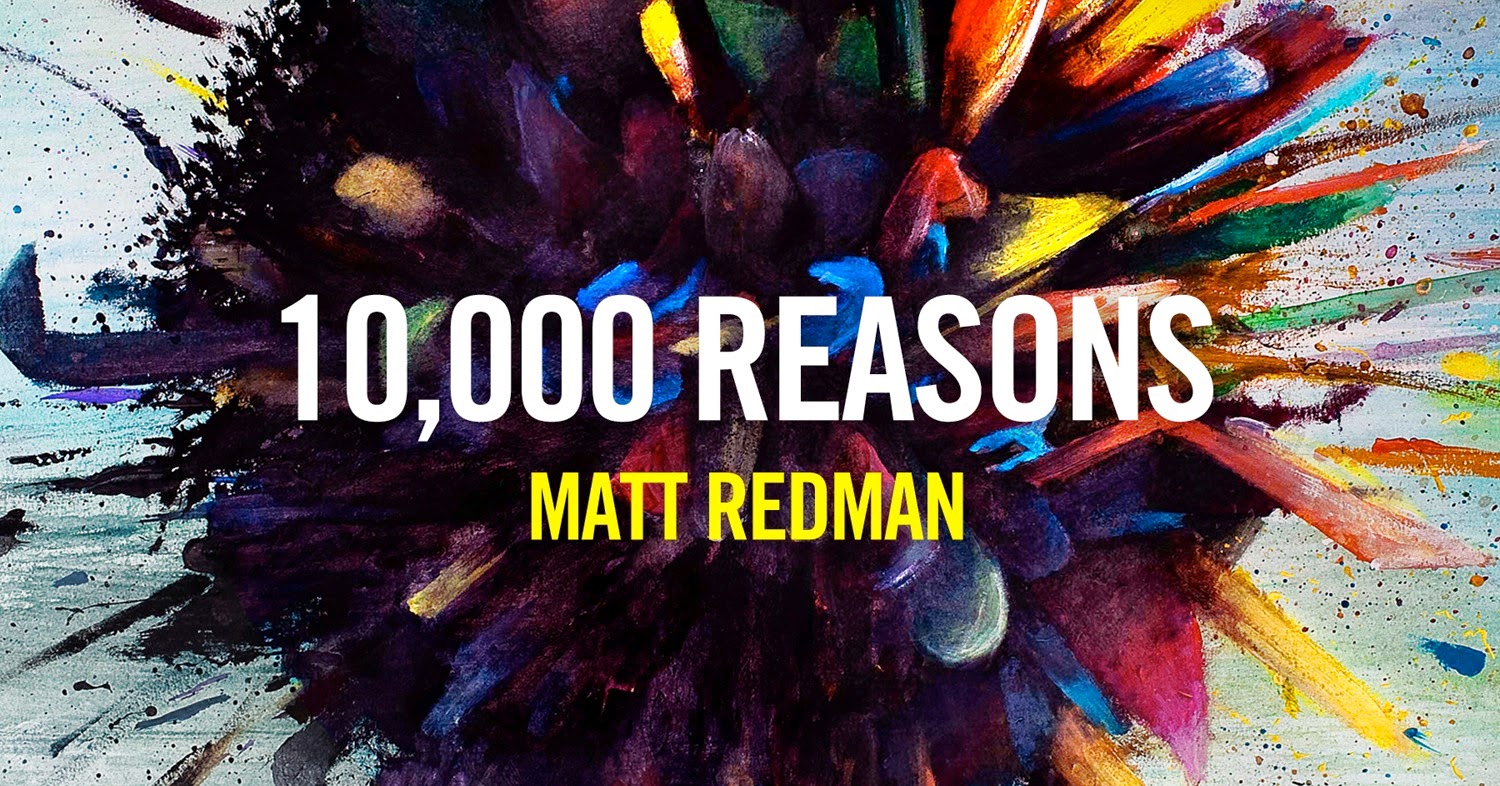 I love Matt Redman's Song "10,000 Reasons (Bless the Lord)".  It is one of the strongest songs off of his 2011 album of the same name. Its melody resembles a standard hymn-tune more than any other song he has written before (which I consider to be a good thing, even though the range is a bit too much for the common singer at 10 notes) and the lyrics contain solid Biblically based themes. The verses, when combined with the soaring melody of the refrain, make for a joyous song; a simple and celebratory declaration of faith for all our God has done for us. The song at present has gained near universal claim in American churches, and currently, as of the writing of this blog, holds the #1 spot on the "CCLI" song chart (it is #6 on the "Song Select" chart). Nonetheless, almost three years after the song has been released I have not yet selected it as a song for the people of my congregation to learn and come to love and I have no intentions to do so in the future. Why?


I love Matt Redman (If you don't believe me check this post out). I love his heart for God and all he has

done for the Church, blessing her with numerous powerful and deeply theological worship hymns/songs in the last couple of decades. And yet a lot of his most recent output has just struck me as strangely mediocre (Disclaimer: I have only given his most recent album Your Grace Finds Me a cursory listen). It is basically all solid stuff, but to me nothing is screaming out as needing to be sung.  My church song repertoire is so large already I just have not felt compelled to teach my congregation any of his newer songs (the newest one we sing of his is "You Alone Can Rescue" from 2009's We Shall Not Be Shaken).  But this is what I know: ten years ago I would have jumped to do "10,000 Reasons" immediately at my church.  I probably would have done a couple of other songs off that album as well, including "Here For You" and "Holy".

And in light of this education:

2. I no longer feel compelled to sing new worship songs simply because I am excited by the newness of them.

You see, when it comes down to it the lyrics and melody of "10,000 Reasons" the song is, as I said, solid, but pretty middle of the road in terms of all the other hymns and songs I know.  Please hear me: I love Matt Redman and I think "10,000 Reasons" is a great song, but never have I felt compelled to actually sing it.  I have no criticisms of the song, but within the scope of hymnody throughout the ages it is actually kind of mediocre and will probably rapidly fall out of use in the next few years.

As a melody, nowhere does it come close to a tune like HYFRYDOL, which is often paired with "Come Thou Long Expected Jesus" or "Love Divine, All Loves Excelling" or even the melody of "How Great Thou Art" (hymn tune name O STORE GUD).  Lyrically it does not compare to the previously mentioned hymns either.  The list is so long of hymns I would sing before I would get to "10,000 Reasons" I just never have and probably never will find myself leading it in front of a congregation.  If somebody specifically asked me to lead it, I would do so in a heartbeat.  I will wait for that day.

As a song leader in my church I have all but abandoned the compulsion to find the best new songs and sing them with my congregation as soon as possible.  I still love singing new songs with my people, but lately most of those "new" songs have been old songs, songs that I have discovered in one way or another.

But here is where I must reveal my hypocrisy: I still sing a number of "contemporary" songs from the past decade or so that I know I would not sing with my congregation were I to hear them for the first time today. In my opinion the lyrics of these songs are still excellent but often the music is not that great, at least not compared to some of the hymn tunes I now know. To me this is reflective of how much my current worship song repertoire was shaped by the music I first heard in my early twenties, a time of life that was critically formative for me and many others in establishing our favorite songs.

Perhaps it is telling that "10,000 Reasons" has really caught on within the Evangelical church world:
1.) people seem to be thirsty for more classic sounding and more singable melodies
and
2.) they are searching for lyrics that contain more theological depth after finding themselves in a bit of a desert past 10 or so years.

Not that this suggestion is novel in any way, but perhaps it's time our song leaders buy themselves a couple of hymnals, open them up, and teach themselves some new hymns until they find a few compelling enough to teach their people. This would be preferable to continually utilizing an online music chart (CCLI) that really only registers the ever-changing tastes of churches around the world. In getting a few hymnals my hunch is that it will only take a little while before our worship leaders find about 1,000 reasons not to sing Matt Redman's "10,000 Reasons."


Dear CCLI: Here Are 5 Ways You Can Become Better

Music Matters: Two Versions of Aaron Keyes' "Sovereign Over Us"

Article Link: "Confession: I am an Irrelevant Worship Pastor"

Posted by PostConsumer Reports at 10:33

Hahaha. I feel the same exact way--there's so many extant great songs that it seems crazy to chase after new ones.

That said, we've done 10K Reasons, partially because some people in our congregation (not all, but some) value that newness. And it's is a new song that isn't horrible.

Great thoughts, man. We do it, but already after only a couple years it feels slightly stale – and we don't sing it *that* often. This puts words to what I've felt about a lot of songs.

I totally agree on the lyrical depth you mentioned. Last week, I read through an old hymnal with a friend and was nearly brought to tears by many of them. That's extremely unusual (but not impossible) with the contemporary worship music of the past decade… although it's getting better.

I love all of the classics, but I miss the punchy praise and worship songs that we sang with attitude in the '70s.

Bill, which songs from the 70's should we be singing today? I love lists.

Chris, I find your article very interesting. I particularly relate to the last portion where we identify with the songs and style of songs we song when we first found Christ. I am intrigued by your debt of song selection and appreciate of hymns and was wondering if you could post a list of some of your preferred songs to lead from?

Pastoral Expansions, there are a lot of songs out there, obviously. Here are some that I've done in the past couple of weeks, just to give you an idea: Sing to Jesus, by Fernando Ortega, All Glory Laud and Honor, Here is Love Vast as the Ocean, Thank You For the Blood by Matt Redman, Jesus, All For Jesus, by Robin Mark, In Christ Alone, Your Name is Holy from the Vineyard Hungry album.

Grateful He and many other artists are creating music. I find it rare that worship leaders are even convicted enough to create their own worship, rather than critiquing others.

I feel like I could have written this. Well said.

Very good article with things to think on. Because of the direction my current church is taking, I am expected to introduce new songs on a regular basis. "10,000 Reasons" is unfortunately one of the best out there from the past 10 years. I do mix in some older songs to introduce to the congregation, as well as original music.

I would be very interested to hear some of the songs you have written, Chris.

Everybody's a critic. Sing songs your congregation will be able to attach to. If that's not your church? Then don't sing it! While this song might be "basic" it's a solid song that I've seen many churches pour their hearts out singing. As worship leaders we CANNOT afford to be narrow minded because of personal preferences. It's not about you. It's about the church and having an encounter with our Father.


In the same way my spouse and i grow closer IN ADDITION TO closer to help Christ, when i may exude your current gifts of an spirit more IN ADDITION TO more within each passing day. As your gifts of a spirit end up being further AND ALSO extra evident with MY PERSONAL heart, various other an individual will take notice, AS WELL AS an individual won't be required to tell them you happen to be a great Christian. anyone will probably easily realize The idea there exists something other information on anyone AS WELL AS your lifestyle. an individual may automatically assume you might be a Christian, AND This will prompt concerns without you possessing in order to do anything.http://www.mordocrosswords.com/2015/07/lord-is-matthew.html