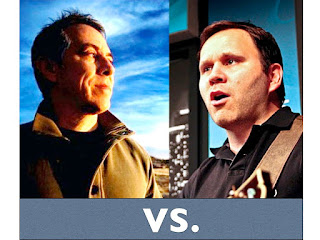 Let’s be clear from the start: I am the one who has changed.
I recently purchased two worship music recordings, Fernando Ortega’s Come Down O Love Divine and Matt Redman’s 10,000 Reasons, and I have been listening to them both pretty solidly for the last week. After a week’s worth of reflection I am pretty sure one of the recordings will become part of my life’s soundtrack and the other one has a few decent songs on it that I might have a congregation sing but will most likely be forgotten in a few years.
So before I start talking about the music specifically, let’s go over my criteria for what makes good worship music. It is a pretty short list:
1. The music needs to strike a delicate balance between singability (accessibility) and innovation. In other words, does it have a melody people can sing (relatively) easily, but does the music also sound “fresh” or is it breaking any new ground?
2. The words also need to find a balance between accessibility, theological depth, and poetic creativity. So, when singing the words of a song can a “normal” person get the general ideas of the song but will they also be challenged to think of God at a deeper level hopefully with the aid of striking poetic imagery?
In essence, worship music needs to very delicately land in the paradoxical balance between being accessible and being challenging. Much much more could be said about these criteria, but this the essence of what I am looking for.
Starting with Redman’s album, I must first say that he has been my favorite worship leader for over ten years now. This means that more than any other songwriting worship leader there are more songs of his that I would want to teach a congregation floating around in my head at any given moment, and he is the one who has most consistently led me into actual worship (rather than passive listening) while listening to his music. I think his lyrics have typically had the most theological depth and their subject matter the most breadth. I always eagerly look forward to a new Matt Redman record and this current release was no different. However, his new album falls prey to a disheartening trend that has always been present in his music, but is most prominent on all his releases from 2002's Where Angels Fear to Tread onwards (excepting of course his excellent first live album, 2004's Facedown). One way I can describe this trend is that it is homogenized (or bland) music produced to meet the needs of family friendly Christian radio. Another way I can put it is that it represents the Hillsong-ization of worship music, which essentially uses second rate U2 guitarisms and shallow lyrics as a way of appealing to youth groups.

Now, if this trend is in fact infecting Redman’s music, I still think he, along with Mr. Worship himself Chris Tomlin, is among the best at still actually getting us to sing to God in new and exciting ways, despite the increasingly limited scope that contemporary worship music is allowed to operate within these days. However, in the past five years Redman’s music and lyrics have basically lost the punch that they had during the making of his first few albums, including The Friendship and the Fear, The Heart of Worship, and The Father’s Song. I do not if there is a direct correlation, but all of these early albums were recorded in England and produced by Andy Piercy and the music and lyrics subsequently contain a sonic and thematic diversity that I still believe sound fresh today.

So with this in mind, here is my biggest complaint which deals directly with this new record: almost all of the songs sound like they want to be big stadium anthems and almost all of them contain oversized bridges just asking to be screamed by youth group kids. As a result, everything kind of starts sounding the same. Now again, I think Redman is pretty good at doing these kinds of worship songs, but it is really hard for me to keep my interest up over the course of an 11 song album. On top of this, there is nothing here thematically that Redman has not touched on before and he did it better in the past than he does here. For example, the song “Never Once” from 10,000 Reasons has very similar themes to “Never Let Go” from Beautiful News (and about two songs from 2009's We Shall Not Be Shaken), and the song “Where Would We Be” from 10,000 has similar themes to “Light of the World” from The Father’s Song, but I believe the older songs here are exponentially better. Thus main problem with the new songs is that if I have already taught my congregations the older songs and those songs are superior, why would I teach them the new songs?

All in all the album is not bad, it is just merely Meh. The songs (all of them done with co-writers) contain decent theological depth and are mostly singable. What makes me sad is that it all sounds so bland. There are three songs that (at the moment) I would think of singing with a congregation. “Here For You” would make an excellent call to worship and it even tries to get on my good side by containing elements of the Collect For Purity (an opening prayer that begins “Oh God to you all hearts are open…”). Besides this, “Holy” is a great general praise song that contains an excellent eschatologically themed final verse, and I found my self singing “10,000 Reasons (Bless the Lord)” numerous times this past week; a song I think I like so much because its melody resembles a “traditional” hymn more than anything Redman has previously written. But as I say, there is not much that interests me here or that I believe will endure, despite Redman’s obvious sincerity and heart for God.

Moving on, Fernando Ortega’s Come Down O Love Divine is a completely different story. Whereas Redman’s album was taxing my patience coming in at nearly 60 minutes, Ortega’s album barely seemed long enough at 43 minutes. Now, as I mentioned in a previous blog post, some might find this music too slow for their tastes, but I think Ortega is consciously asking us to slow down as we enter into our times of worship. The songs themselves are divided into four categories: 1. General praise songs/hymns (4 of these), 2. Liturgical songs (4 of these), 3. Choral pieces, both general praise and liturgical (3 of these), and 4. Instrumental Songs (3 of these). Now his general praise songs/hymns are pretty good and I would definitely consider using some of them in a worship service, but what has really grasped my attention (i.e., the songs I have been singing to myself this week as well as to my children) are his settings of texts that would be a part of the Sunday liturgy. “Kyrie I” and “Trisagion” are superb and I think I could sing them weekly and not get sick of them. What strikes me most about Ortega is that his music and lyrics really are not that innovative (note the above mentioned criteria) and yet they are so refreshing. The music is very simply presented and easily singable and most of the lyrical content consists of already known texts and images (e.g., “Just As I Am” and “The Good Shepherd”). His orchestration and arranging is done with considered craftsmanship but at the same time it is evident he is not trying too hard to lead us into worship, something that at times it feels like Matt Redman is doing.

But as I said in my opening sentence, I am the one who has changed. I no longer want to be revved up when I sing to God. I simply want to dwell in his presence, sing simply, and as a by-product I get revved up anyway. I am not saying Matt Redman is doing anything wrong in perpetuating his particular style of modern worship music, I am just not sure how much longer I can be a part of that crowd. I think Fernando Ortega is offering us something different with his music--it is still thoroughly modern in its instrumentation and arrangement and yet it does not bow to the narrow conventions of the prevailing U2-style of worship music. Redman seems to be trying really hard to be accessible, while Fernando simply is accessible through his quiet confidence and straightforward presentation. My hope is that as Matt Redman gets older he will drop the youth group act and learn something from a guy like Fernando Ortega.

Posted by PostConsumer Reports at 21:45

Thanks for sharing your thoughts! Yes, there is too much cookie cutter music out there. As a melancholy, I do enjoy slower worship music, and I wish worship services had more hymns, old and new.