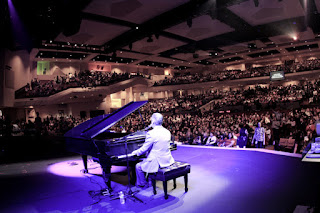 Unanswerable Questions--The beginning of an ongoing segment here at PostConsumer Reports where I ask questions to people of interest who will most likely never answer them, simply because I do not know them and probably never will. Still, the questions come and I have got to ask them somewhere. I have so many questions. So so many.

1) Lauridsen's Lux Aeterna is one of my favorite pieces ever written. I've often listed it among my "desert island" CDs (The recording with Salamunovich and Los Angeles). Good ear, Chris.

2) This is my first real attempt at writing choral music. I've done a couple of things for my church, but not nearly as involved as these pieces. I would love to explore it further. If there are modal tonalities in any of the choral pieces, it's purely by accident. I didn't set out to write in any particular mode.

3) These days, everything I write comes out slow. I don't know why. For awhile, when I was traveling with a band, I used to work hard at writing faster, more punchy songs. A few of them work pretty well, but for the most part, when I try to sing other stuff, I sound contrived. My most successful work (IMO) along those lines are on my self-titled record.

4) The congregation is very much on my mind when I write specifically worship songs - the key, the range, the accessibility of the song. I'm not prolific at this stuff yet, but I hope to be.

5) We sing several of the songs I've written at my church. I don't feel as self-conscious at my home church as I do when I'm visiting another church and they sing one of my songs. I don't think of it as a vain thing to do. Many famous guys did it throughout history when they were called to be the choral master in a given church - Bach, Purcell, Vivaldi, Hayden, Handel - etc.

6) In retrospect, I should have cited the original hymn Just As I Am as a partial lyric source for my new song. I'll try to correct that on the next printing.

7) Yes - all the Anglican songs were written out of necessity for our congregation, or by the request of our rector. Anglicanism has really influenced the way I think about worship music in that (like any other liturgical denomination) it follows the church calendar. The entire order for worship each year is guided by the narrative of Christ's life (as you know, being Anglican yourself). To be more specific, if I am writing a song for lent, I am very cognizant of the overall tone of lent, which is a penitential season. Advent, which is also considered penitential has a different kind of hopefulness to it, or a sense of anticipation, combined with a sense of longing. Those things affect the way we pray and carry on our devotional life at home as well.

8) I'm not really signed to Sandy's label. She has just graciously agreed to be the means by which the record gets manufactured, distributed, and accounted for. Stylos Records is doing an amazing job so far and the people there are terrific.

This record was funded entirely by a wonderful group of investors, mostly friends I've know for a long time. I guess that would (sort of) make me an indie artist. Ha. The music should have become automatically more edgy and hard. Instead, it got even more mellow.

9) I'll work on the sheet music thing for you. Maybe we can connect at tonight's concert. I'm glad you're coming. It's been a blast reading your blog but I only figured out today how to respond. When I logged on, I was surprised to find this list of questions. You've made me laugh several times - and my friends as well. Now, you've exhausted me with this interview so I'm going to head to Chipotle to get some lunch before the concert tonight. God bless you Chris, and thanks for all the excellent press. I look forward to swapping worship leader ideas with you.