Jim Gaffigan and the Physicality of Comedy

Jim Gaffigan is coming to Peoria on March 21 at the Peoria Civic Center Theater. Check out his website for ticket info: http://www.jimgaffigan.com/tour-dates

Last month my wife and I and another couple from our church went to see Jim Gaffigan live in Champaign, Illinois.  I guess it was a bit of a pilgrimage of sorts, as a lot of people we knew were there as well. If I could make a recommendation it would be this: go see a top-of-the-line standup comedian sometime or at least try to spend an evening laughing as much as possible. It is good for the soul and good for the body.  In my opinion nothing provides more minute by minute laughs than standup comedy (over than say a sitcom or a comedic film), but whether it is having fun with friends or reading a joke book (do people even do that?) give yourself some extended time to just laugh. (I can see it now, my new self-help memoir "Eat, Pray, Laugh, Love"...)

I tend to be the analytic type and so right in the middle Gaffigan's set I stepped outside the present moment of receiving his barrage of tightly packed 10 or more jokes per minute, in order to do some thinking.  I became increasingly aware of how as my brain connected with the jokes it was simultaneously affecting my body, my actual physical condition; that the joy I was experiencing was at once psychological and sensual; that my pleasure was both in the mind and of the body.  What I was coming to terms with was the utter physicality of comedy. In this, I am not referring to physical comedy, where a comedian or actor does something with his or her body to get some laughs (think the slapstick of Jerry Lewis or The Three Stooges), but the actual physical effect humor has on a person who is listening to and watching a comedic routine.

I will say more on my physical experience of the show later, but first I wanted to make some observations about Jim Gaffigan himself.


1. The Comedic Everyman: In my opinion no one is presently embodying the "everyman" type comedian better than Gaffigan and in this he is the best present day heir to Bill Cosby (right up to the skin and hair color).  Gaffigan and Cosby's sweet spot was in doing routines that everyone could relate to, and thus they became an Everyman (perhaps Louis C.K. is the present day Intellectual Everyman, like George Carlin was for the previous generation).  In general their material would be considered entirely cliched and overdone: routines about family life, relationships, and food.  Really, how much more do we need to hear about that stuff?  Well, here is where Cosby and Gaffigan enter into the upper echelon of their craft: they continually make the mundane profound.  Over and over again during his show, as Gaffigan riffed on food, interspersed with some thoughts about his kids and wife, then coming back around to food again, I was astounded at his ability to offer razor sharp insights that just gutted us with laughter. (his bit about seafood was my favorite).  In some senses his greatest skill is mining the everyday stuff of life for every humorous insight he can think of.

2. Inventing A Comedic Persona: While watching Gaffigan a truth struck me that in many ways should be obvious to anyone who watches comedy but often goes unacknowledged: I was not watching Jim Gaffigan tell an audience jokes, I was watching the performance of a comedic persona he had created tell an audience jokes.  Extrapolated outwards then to comedians in general, we could say the public side of nearly all comedians is a created persona. Now, for some comedians, the persona is more front and center and exaggerated, as with Rodney Dangerfield, Bobcat Goldthwait, and Andy Kaufman, whereas with others it is more hidden, as with Jerry Seinfeld, Chris Rock, or Maria Bamford.  The former group are more in the "clown" category of comedy, while the latter have created personas that are hyper-real versions of themselves, which is why it is harder to see that Seinfeld has indeed created a persona.  It feels like it is just him up there talking to us, but really it is an exaggerated version.  Sure Seinfeld really does think about all those observational things that are in his jokes, and I am sure he is also naturally funny in real life, but it is still not the true Jerry Seinfeld up there on the stage; it is a character he has created for comedic effect.  For what it is worth, I would say Gaffigan falls into the latter category.  Now, some might argue that confessional comedians, like Marc Maron, are really being themselves onstage, and there is probably a lot of truth to that. Still, I would say that even Maron is creating an exaggerated version of himself, even while his material is highly and authentically biographical.

Here is what tipped me off to Gaffigan's "comedic persona": there was one time in particular during his set where he whipped out 5 or so jokes right in a row, in like 20 seconds, like Barry Bonds hitting 5 home runs in a row during a home run derby (and I'm not accusing Gaffigan of using comedy steroids, BTW).  So, while laughing hysterically I was astounded at the incredible level of skill it took to link all those jokes together, jokes that were funny by themselves but even funnier when tied together thematically (which they were).  You see, Gaffigan's whole schtick is that he is this lazy, obese, somewhat shallow, "typical" American male.  If I could give it a title it would be "the lovable schlub".  And herein lies a great deal of dissonance because performing in front of us we have this lazy schlub who is telling us a highly skilled set of jokes to the point where we are nearly laughing non-stop for an hour and a half.  Thus, the lazy bit is Gaffigan's mask, it is the character he is playing, and the way he gets us to laugh, because when you get down to it, there is nothing lazy about anything Gaffigan does during his set, for in reality we are observing the ease and skill of a virtuosic performer at work (more on that below).

3. Religious Humor: during his set Gaffigan had a brief couple of minutes where he told a series of religious jokes.  It was the most awkward section of his set; that is, he himself did not exactly seem comfortable with the jokes.  Although I do not remember the specifics of the jokes themselves, I remember there being some deeper points to them (especially about America's current lackluster commitment to God), all of which seemed like a gutsy move for him to make, given the pretty mainstream audience in attendance.  All that is to say, I would like to see him develop his religious material more.  If he could get over his own lack of confidence in the delivery he could be the most insightful comic with religious material around (and no, Tim Hawkins would not make my list).

4. An Unanxious Presence: religious material aside, another aspect of his act that really struck me was just how calm Gaffigan was up there on stage. This is often called being "an unanxious presence."  The ease of his delivery and the way he transitioned from subject to subject was a thing a beauty.  This became evident to me because I had his opener, Tom Shillue, to compare him to.  Shillue was actually really funny and had some great material, but one could tell he just was not as comfortable as Gaffigan in front of all those people; that he had not developed as much confidence.  (Still, it cannot be easy being the opener: you have to cut your material down significantly, you have to warm up the crowd entirely on your own, and you have to win over a sizable amount of people who have never heard of you and have not come to see you make them laugh but some other more famous guy that everybody already loves.)  But that just makes what Gaffigan does all the more astonishing: to be an unanxious presence in front of strangers for an hour and a half is a remarkable feat for a performer and it shows that Gaffigan has earned his place as one of America's great comedians.

5. A Virtuoso Performance: at the very end of his set Gaffigan went right into his infamous "Hot Pockets" routine.  To me, it felt like a legendary rock band going into one of its most famous songs, like if I would ever get to hear Brian May play "Bohemian Rhapsody" (which would probably be a letdown at this stage) or Paul Simon play "Graceland" (which would most definitely NOT be a letdown).  Here was this virtuoso performer, playing his most well loved "song", an ode to America's most well-love diarrhea-inducing food, the Hot Pocket.  And perhaps what was even more amazing was seeing the subtle ways he has added to the routine over the years, adding nuance and a few more observations.  As soon as he went into the material my defenses went up, daring him to make me laugh at this tired material I had heard so many times before.  But I could not help it.  He won me over and I laughed the whole way through.  The man's a virtuoso.

And so finally, here are my observations on the utter physicality of comedy:
Throughout the show I found myself:
--Laughing, sometimes in a high pitch, sometimes just pushing out air in a guttural wail, but always with a cramp inducing smile on my face.
--Slapping my legs with my hands or stomping my legs on the ground.  It was almost like I couldn't get the funny out quick enough, like the enjoyment was too much to bear. At times it felt like the funniness of it all was overtaking me and the only way I could reach a state of equilibrium was to make sharp jerking movements of some kind.
--Looking over at my wife to share in the moment, as if saying "Can you believe he's really saying that?! Can you believe how funny this is?!"
--Leaning on my wife or doubling over, as if to say "I can't take anymore.  I succumb to his comedic barrage of jokes.  He wins!"
--taking a breather and not laughing as much for a couple of minutes.  One can only take so much

I did everything but cry or pee my pants, all of which have been possibilities in the past.  In the end I felt like I had had a mini-workout, but maybe that's a sign my diet and exercise habits resemble Gaffigan's too much and not that laughing is that exhausting.  Either way, it was one of the most enjoyable nights of my life.

Here's some other writing I have done on comedy:
Seeing Bill Cosby live and COSBY FUNHOUSE!
Making A Case For Dark Comedy: Maria Bamford 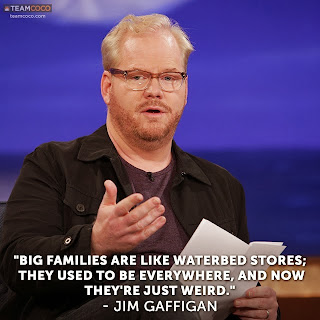 Posted by PostConsumer Reports at 11:06

Unfortunately we all create our own personas that we portray for those around us. We, or at least I, have one for those who are closest to me, and another for casual acquaintances or those I do not know. It is soooo hard to be completely transparent...even with those we love. How I long for Christ's return so that I can shed these personas.