Slowing Church Down in a McDonald's Culture?: A Review of Slow Church 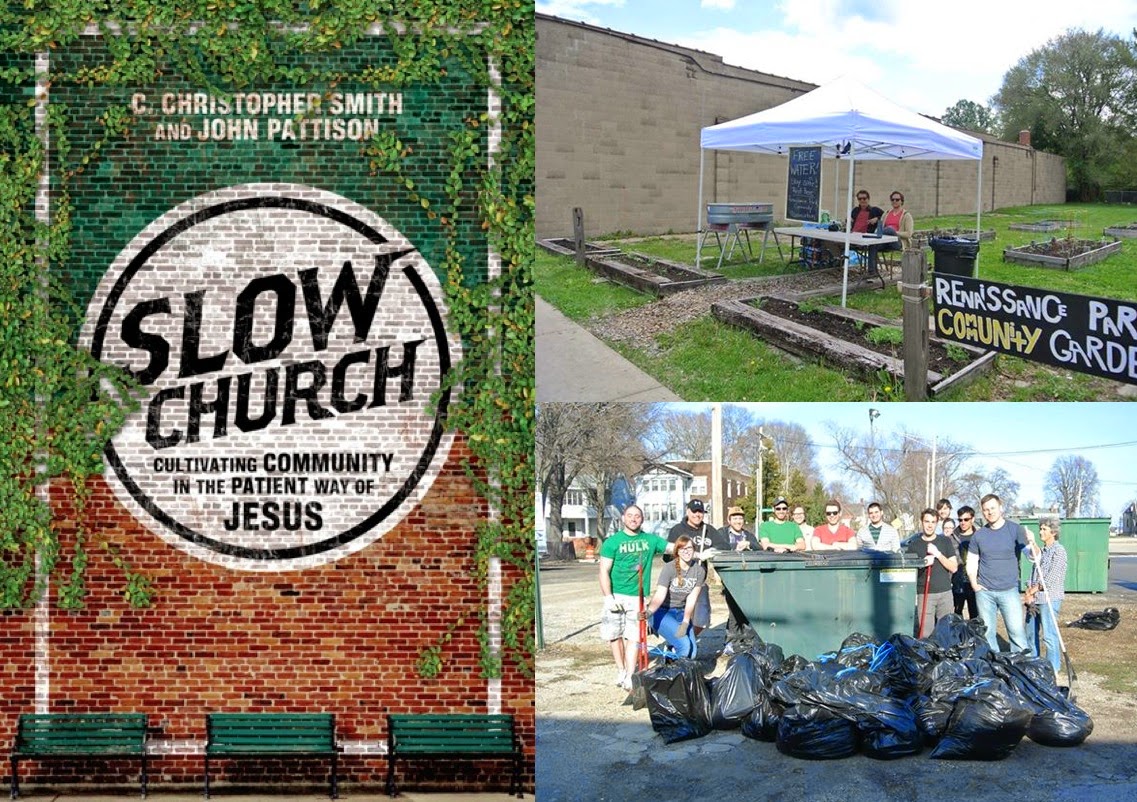 "Slow Church takes the long view, examining all thought and culture, every ideology and assumption, all action and reaction by the messianic light of the last day." (Slow Church pg. 24)

"And yet, as much as we are formed by Western individualism, and though we have allowed that individualism to shape the way we read Scripture, our calling in Christ is to community, to a life shared with others in a local gathering that is an expression of Christ’s body in our particular place. The people of God become a sort of demonstration plot for what God intends for all humanity and all creation." (Slow Church pgs. 29-30)


When I was a kid I went to a Pentecostal church—a decently prominent one for our area. There was a time when our community was seeing decline and the pastoral leadership took a trip to a non-denominational kinda-sorta-megachurch in another state. When they came back the structure of our Pentecostal worship (consisting of a longer section of free music at the beginning, a sermon, and an altar call, with the possibility that someone could give a prophecy at the beginning and end) became more and more streamlined; everything was shortened so as not to offend potential "seekers". The freedom and sense that God could break in to our worship at any moment was had left. On top of this, a multi-year renovation of the church sanctuary began: everything got darker and sleeker, resembling a music club or movie theater, again, so the "seeker" or visitor would feel comfortable and even obtain a sense of anonymity and wouldn't feel pressured into believing in God or being a committed church goer. Oh, and I forgot to mention: a couple of years before their visit to the mega-church the senior pastor had read Rick Warren's The Purpose Driven Church (much like pastor's read Andy Stanley's books now).

They were trying just about any viable system to get the church community to grow (in numbers) and none of it set well with me. It seemed like they were prescribing a system onto our church culture in particular and the general Midwestern culture we lived in, rather than describing what those cultures were in the first place and then ministering the Gospel to them from there outwards. I have no idea if any of it worked. I quickly lost interest in the ministry version of Keeping Up With the Jones' and upon entering seminary joined a movement I had no idea even existed at the time: the Slow Church Movement. Actually, the church I became a part of (an Evangelical, Charismatic, Anglican congregation) didn't know they were part of the movement either—they were and still are simply doing ministry the slow way, the way that listens, the way that allows the Spirit to move as he wills. But now someone has come along and articulated was "slow" church looks like. More on that in a minute.

First I must say I really feel the angst of the pastors at the congregation where I grew up. What do we do when people stop coming on Sundays? How do we engage people again? How do we REACH them? I understand giving into the temptation to implement a program that "works", or at least that worked in California or Georgia or England or Brazil. For those of us who believe in the Lordship of Christ, no decision we make ministry-wise in our increasingly post-Christian and post-Christendom culture is easy. It's a minefield out there people.

Well, it just so happens there is a new book out that finally (FINALLY) gives us all the answers; finally gives us the perfect church model for getting people in our doors and introducing them to Jesus. It just so happens it is the most difficult model possible, one that makes real the meaning of word longsuffering. In Slow Church: Cultivating Community in the Patient Way of Jesus (IVP Books 2014) by C. Christopher Smith and John Pattison the new "formula" is simple:

1. YOU NEED TO SLOW DOWN. Take a deep breath and as you do seek God and ask him to give you eyes that see and ears that hear. Learn how to listen to God and to the people God is placing in your path.

2. The Church is not a machine and neither is it a fast-food restaurant. The Church is more like a tree and trees can naturally grow to be quite large so long as they are given plenty of time and proper cultivation to do so.

3. So, if you want God to use you, plant your roots down deep, learn to understand the soil you are growing in, and get ready to work, listen, and converse even as God fills you with the grace to do so.

In this sense, the authors of Slow Church are propagating a formula-less formula. This could immediately cause some skepticism in a potential reader, as it did me before I started reading: Why read a book that doesn't lay out some definite plan? Why read a book where the "plan" seems to be "It's going to take a lot of time but if you are really patient and you learn how to minister to the people of your community by listening to them and understanding them and resting in God, then eventually you will see God's Kingdom come where you live"? Can't we just do that on our own anyway?


Well sure, but to do so would be to miss the point of Slow Church the book on two points, one negative and one positive:

1. First, authors Smith and Pattison want church leaders and ministers to take a step back from the very prominent "church growth" movements of the past few decades in order to see how the premise of such movements are based more on corporate business models and the idolization of efficiency for the sake of "results" rather than the principles of the Kingdom of Heaven (chapter 2).

2. Second, Slow Church is more of an extended meditation on an approach to ministry rather than a step by step system to implement in your congregation. Sure, the authors give plenty of examples of projects they are a part of in their towns and cities (for example, starting an arts collective, working closely with local businesses and farmers, and even closing down a food pantry in order to work with those in need on a more personal level), but these are meant to inspire the imaginations of pastors, church planters, and ministry leaders. Slow Church doesn't prescribe a model of ministry but it lays out a paradigm through which to begin seeing how's one's own life and the life of his or her church community can become the living and active Body of Christ where they live.

Therefore, each point Slow Church makes is worth contemplating in prayer with God and in community with the other Christ followers in our community...and slowly at that...

For Smith and Pattison the Church, among many other things, is to be the kind of people who:

—take time to understand the communities and cultures they find themselves in (this includes the arts, the economy, as well as family structures).
—decide to take root in their communities, living in them over an extended period of time.
—do not seek quick paths towards “success” in ministry, but instead seek the slow moving patient path of God’s blessing.
—take time to be present with those suffering in our midst, to have the patience to be compassionate towards others.
—take the time to see where those are being mistreated in our community and world.
—take time to live simply so we have more to give to others and be better stewards of God's creation.
—take the life and teachings of Jesus seriously, even when to do so makes us uncomfortable and strange to our culture.
—as those created in the image of the Triune God, acknowledge our interconnectedness to all of creation.

Slow Church is certainly in the same line of thought and practice as many of the "Missional Church" books that have come out in recent years. Perhaps one of the differences in Pattison's and Smith's work here is their attempt to connect what God is doing in our communities to every aspect of life, that is all the various ways we live, work, play, and commune with each other. That instead of incorporating a model of ministry from the outside in our goal should be to see God's kingdom come simply in how we live in all the diverse giftings of the Body of Christ. To allow God to do this is simultaneously and paradoxically counter-cultural and intriguing to those who are not in the Church. We become, to steal a phrase from Stanley Hauerwas and Will Willimon, "resident aliens," strange creatures that no one knows quite what to do with.

So, let's take a few steps back, read Slow Church at our leisure, converse on the excellent discussion questions provided at the end of each chapter, and allow God to do some amazing work among us.

Slow Church can be purchased here.
For more info, check out the Slow Church blog.

Posted by PostConsumer Reports at 15:04