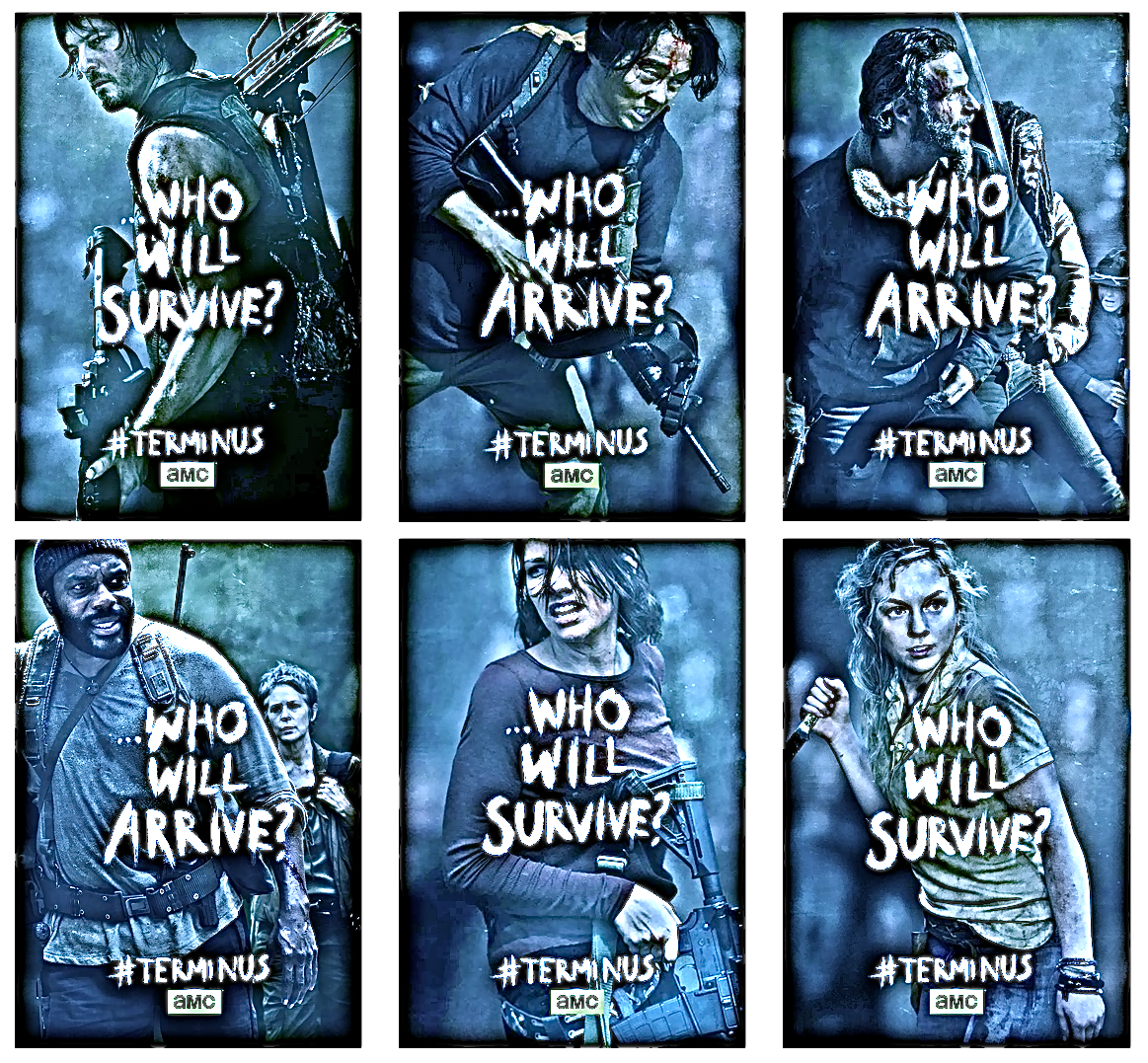 The Walking Dead began it's 5th season on AMC this past week. In light of this (and in light of catching up with all the episodes on Netflix), I'm left wondering 5 things about how the show operates and about where the show is headed in the future. This is an expansion of a previous article on the series:

1. What kind of contracts do the actors have?
Being an actor on The Walking Dead must be a strange thing indeed. I wonder how much each actor knows about the fate of their character? Supposedly there's a good deal of difference between the comic book and the TV show, so maybe both the actors and viewers can't read ahead and see what happens. I've not read the comic, so I have no idea how the different plot lines do or do not overlap. But I do wonder how far in advance the actors are informed about their characters, both how much they'll appear in a given season and whether or not their characters are going to die (either by getting their muscles torn into by a biter or by getting themselves kilt by a fellow non-dead human). Do the actors live in constant fear of their character getting killed off? I mean sure it seems like Rick's and Daryl's and Michonne's characters are safe to endure on into the future, but how can they know for sure?

And so, when a character like Lori or Hershel gets sent off the show, does that leave Sarah Wayne Callies and Scott Wilson (the actors who play those characters) scrambling for work the rest of the year? Does that leave them out of a decent chunk of money they thought was coming their way?

But then the show itself is inconsistent enough for the actors still on it. Last season a few episodes were almost entirely devoted to the Governor's narrative arc and then in the middle of the season, when all our beloved characters were scrambling around looking for each other, there were a number of episodes half the leads didn't appear in at all or only appeared in for brief times. What I'm curious about is how this is all worked into their contracts. How do actors in a show like this get paid? Per episode, per scene, per line? And who breaks the news to them when they find out they'll only be appearing in half the episodes for the coming season? Do they ever protest, do they have any leverage over the writers, or do they just have to take it?

2. Do the actors have riders in their contracts making sure they stay really really skinny?
One thing I began to notice while watching season 4 was just how incredibly skinny and gaunt all the actors are. I wonder how intentional this all is. I realize there are some people that are just naturally skinny, as in their metabolism makes them so (I am not one of these fortunate creatures). But man, everyone on the show is looking (appropriately) thin—some are even beginning to look a little weak (C'mon Rick! Eat a little.).

Here are my questions: What is written into their contracts? How controlled are the actor's diet's and who is in charge of that? Do they hire someone to help them or do they just starve themselves using their own willpower? What would happen if they gained too much weight in between seasons?

3. How much do the writers, directors, producers, and show runners actually care about us as viewers? And is the show actually going anywhere?
As the dead keep on walking (and walking and walking and spinning off new TV series) it's hard not to get a little cynical. Is The Walking Dead just a zombie horror soap opera, meant to forever string us along through an endless series of increasingly horrific circumstances where beloved characters are introduced only to be killed off? (just take a look at season 5's teaser poster's I put as the lead image of this article) Is there an endgame to it all? Do the show's (and comic book's) creators have a set of underlying principles they are trying to convey?

Sometimes it's hard to think so. Supposedly (according to the AVClub) it's AMC's most popular show (by far), with the showrunners planning a narrative arc on into a possible 11th and 12th season. And sometimes, as AVClub reviewer Zach Handlen has pointed out, it's not clear if the plot is going anywhere (shall we say to a "terminus") or is instead a series of increasingly darker and grosser shock-porn moments with increasingly diminishing returns (that is, after a while we grow tired of getting shocked, if that's all we're getting). I don't fully buy into this interpretation of the show, especially as last season offered some more out of the norm meditative character studies than usual (e.g., "Live Bait", "After", and "Still"), all of which I enjoyed. But it's difficult to think about the show extending on for 6,7, 8 more years. I enjoy watching the show so much, but it's also incredibly stressful—and sometimes I wish I knew it was headed somewhere, like when Breaking Bad and Mad Men let us know they're heading into their final seasons. If they have a story to tell that's fine—I just want to know they're not messing with us and not continuing a show along indefinitely because it's a cash cow. I respect artists more who have a definite vision and have the wisdom to know when something should end.

4. Do the actors ever protest some of the things their characters have to do?
Let's face it, some of the characters on The Walking Dead have to do some awful things. Sure, there are the villains like the Governor and Shane and Merle and that guy "Joe" that Daryl was following around in season 4, but what about our protagonists, those we're rooting for? From time to time Rick and Carol especially have had to make some awful decisions, as these memes poke fun at:

But what I'd really like to know is if an actor on the show (in this case Andrew Lincoln or Melissa McBride) has ever protested, saying "No! I'm not doing that. As an actor I cannot morally be a character who does such a thing." The issue has to do with how they are asked to kill a character, who they are killing, and what motivations led them to do so. A lot like doing a sex scene, I honestly don't know how these actors go through with such things.

I can understand how they would look at their characters, who are attempting to stay alive in a post-apocalyptic universe and then say, "Yes, they have to either survive or be destroyed. They'll do what they have to do," and then just go along with what the writers have written for them. I just know that I wouldn't be able to do it. This also really makes me hope a Hershel-like character gets added to the show again as his discerned and sensitive morality will be missed if all we're left with is I-Must-Protect-My-Family! bloodbaths. But how many of those characters could be left in the increasingly desperate Walking Dead universe?

So, my questions: Has an actor ever protested to the point where it's caused trouble between them and the writers, directors, and producers? How was it resolved? Did they rewrite the narrative or did the actor give in? Has any actor ever left the show for reasons of conscience?

5. How much sleep have Robert Kirkman (the creator), Frank Darabont and Scott M. Gimple, and all the actors lost over being in this show and having to continually contemplate the ways humanity can destroy itself?
In the past few months since I started watching the show, I have lost sleep over it numerous times, and basically none of those times were because I was having some nightmare about zombies. That's not what I'm afraid of and thus that's not what I dream of. Instead, my nightmare(s) consist of all the decisions that need to be made in the face of evil, of keeping everyone I love alive, and of keeping the evil out from whatever vulnerable fortress of safety I've been able to erect. This is what keeps me up at night after watching the show, which admittedly, I shouldn't be watching so close to my bedtime.

So, what I wonder about is how much sleep has Kirkman lost over the years? How does the guy stop thinking about zombies and all the evil in the heart of humanity? How do the actors calm themselves after a shoot wraps? How do they detach from it all? After smashing in zombie heads, taking down murderous dictators, and being forced to end the lives of children (all as actors, I know), how do they get back to "normal" life?

These are the things I think about...

With all that said though, let's get ready to watch season 5! Here's to many more creative ways to watch grotesque zombie deaths! Here's to knowing that any moments of catharsis and peace and happiness will soon end with more panic and death and running away! Here's to looking forward for more major character deaths!

Other zombie related articles:
10 Ways Zombie Stories Cause us to Think About Our Lives
Obvious Conclusions: Zombie Edition
Posted by PostConsumer Reports at 12:25