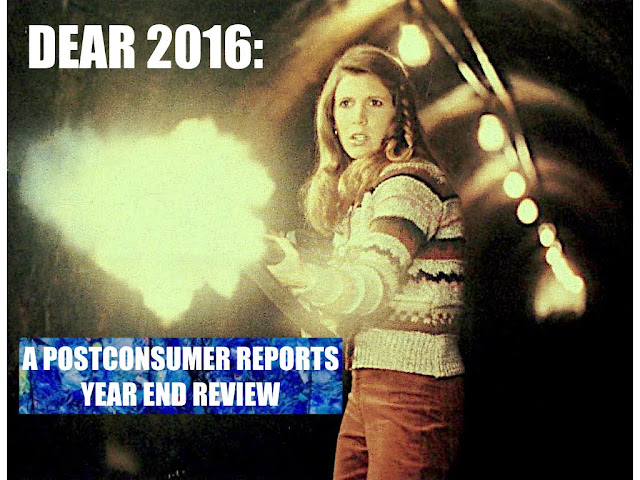 Featuring podcasting, blogging, music, TV, & film, and a look back at the year for PostConsumer Reports.

So, it's the end of 2016. And everybody hates you 2016. You're not invited to anymore parties. No one feels safe around you. It's time to seek serious help. The only people remotely happy with 2016 are those who think Donald Trump should be our president, but I assume even they are more than saddened by all the great artists who died as well as apprehensive about the many troubling issues facing our nation and world (assuming they are paying attention).

It was personally a trying year for me as my wife became very sick and we are still in the midst of getting her well. (If you're curious: she had/has Lyme disease, but there's other stuff going on that is too complicated to explain here and that we are still figuring out).

Even so, 2016 was a good year for me and for PostConsumer Reports. My wife and I celebrated our 10th wedding anniversary (which I commemorated by doing a long blog series on the album of songs I recorded for her) and got to go on our first vacation without the kids since the kids first arrived as our kids. Speaking of the kids, they all (mostly) learned how to swim and are all in school now (2nd, K, and Pre-K). I got to speak at my first worship music conference early this fall (a small one, but I was still very honored to be part of it). Finally, I recorded and released a new album of Christmas music (please give it a listen here: You can download it for only a $1). Now on to the lists and a look back at a year of PostConsuming.

A report on PostConsumer Reports
In a number of ways this was a big year for my blog. I officially got my podcast off the ground and managed to get out 36 episodes. I had a tremendous amount of fun interviewing people, from friends to semi-famous public figures.

Here were my most listened to episodes:
Episode 32: Pam Destri—The EMT called to the accident that took the life of Rich Mullins

Regarding the blog, I also had the most people viewing and clicking on my articles this year than any year previous. And 5 of my articles published this year are currently in my all time top ten most viewed list:

A Letter to Christians Who Still Support Donald Trump (6100 +)

The Best New Worship Music (according to PostConsumer Reports) (4200 +)

Podcasts
There are so many podcasts out there and WAY too many episodes to be able to even begin documenting them all. However Marc Maron's WTF, Fresh Air With Terry Gross, On the Media, All Songs Considered, Can We Still Be Friends, The Uncertain Hour, and Alec Baldwin's Here's the Thing we my favorites. I don't know if you can tell, but I mostly listen to interviews.

Music
I don't purchase enough music every year to have an informed enough opinion of what is actually the album of the year. The list is long of albums I want to listen to (Bowie, Kanye, Beyonce, Solange, Chance the Rapper, Frank Ocean). If you want more of a comprehensive list I recommend listening to the All Songs Considered or Sound Opinions podcasts, or checking out this blog: musicforants.tumblr.com/. I can, however, tell which albums I listened to the most and were my favorites

Album of the Year: Audrey Assad's Inheritance: Assad's album of hymns and new worship songs is truly a stunningly beautiful work. There is so much emotion and meaning poured into every note. Please go listen to this album. Hey, even if you're not a Christian and have no interest in "worship" music, would you consider giving this album a try? I'd love to hear an outsider's opinion on an artistic achievement like Inheritance.

Matt Redman's These Christmas Lights: I just started listening to Redman's Christmas worship album. From the first few listens I think it might be his greatest work in years and it is more of a gutsy release than people might realize. If you approach it like a complex concept album you'll see the depth of what he is trying to do in these mostly original songs about the coming of Christ.

Radiohead's A Moon Shaped Pool: I still haven't listened to this album enough. It is beautiful and stark and sad.

Phil Keaggy's All At Once: This is not a GREAT Phil Keaggy album, but it is PRETTY good. If anything, it once again puts all of his talents on display. You can read my full review of it, as well as the album below here: Paul Grandpas Rock Review: Simon & Phil Keaggy

Paul Simon's Stranger to Stranger: Paul Simon's possibly last album is another great work of melancholy lyrics undergirded by a synthesizing of the world's folk music.

Television Comedies
Show of the Year—Detectorists: If I could recommend one new TV show from the past year it would be Detectorists, starring Mackenzie Crook (of The Office and Pirates of the Caribbean) and Toby Jones (of lots of things, including the new season of Sherlock). It is the most human and funny show I've seen in a while. It takes a quirky subsection of society and makes them normal (way, way better than Christopher Guest's awfully awful Mascots did). I cried and laughed with this show numerous times. Please find a way to watch it.

Catastrophe: This is a great comedy about a couple who falls in love later in life and end up having a baby. Also, it's one of our last chances to see Carrie Fisher at work. They just finished up filming the 3rd season of the show in London, which is where Fisher was coming home from when she suffered her fatal heart attack.

Billy on the Street: Another version of punk rock comedy. It's like Borat hosting a game show, except Borat is a gay, celebrity-obsessed, manic baby. Really, this show is hilarious.

Lady Dynamite: Maria Bamford's staring vehicle was hit-or-miss for me, but there are numerous moments throughout this season where Bamford is allowed to shine as the brilliant comedic voice those of us who love her know her to be.

Maya and Marty: This was an incredibly inconsistent and short-lived show, but when Martin Short was allowed to do his own thing, he proved once again to be one of our greatest living comedic geniuses. Find a way to catch his stand alone skits. They are tremendous.

Television Dramas
Show of the Year—Black Mirror: What a truly terrifying show this is. I can only take about one episode per week as I end up thinking about each episode throughout the night and on into the morning. I like to get sleep thank you very much.

Good Girls Revolt: My wife got me into this show. It's racy at times (unexpectedly so), but it's a fascinating story. Also, it should be noted that it only replicates Mad Men in how it looks. It's telling a different kind of story and in a different kind of way. It chronicles a bit of American history that deserves more attention.

Better Call Saul: Some say this is the best show on television. I haven't seen enough episodes to know, but Better Call Saul looks to be amazing and dare I say perhaps better than its predecessor?

Films
I hardly saw any new new films this past year. I just don't live that kind of life right now. As always, there are many new films I'd like to see, including Hell or High Water, Manchester By the Sea, and Scorcese's Silence.

However, I did get to see Rogue One and it was Uh. Maze. ING! I couldn't have been happier with the film, and that's all I'll say for now. Other brilliant but not quite new movies I saw were Sicario, Spotlight, The Big Short, and Drive.

And Ex Machina! Watch that too! It's like an extended Black Mirror episode.

New discoveries (that are actually old):
Tangerine Dream (band)—This is where the music of Stranger Things drew it's inspiration. I hope to listen to more of them in the future.

The Treasure of the Sierra Madre (film)—A classic film with Humphrey Bogart. Classic. And thrilling.

Magical Mystery Tour (film)—After many years of wondering what it was about I finally got to see The Beatles' strange little film. Honestly, it's a mess, but I'm glad I watched it

Live Die Repeat (Edge of Tomorrow)—Tom Cruise is my favorite super hero. I will watch basically any movie he is in because he is the same character in ever movie and that character is awesome.

Tim and Eric Awesome Show, Great Job!—What a bizarre spectacle. All I can say is this year Tim and Eric's "sense of humor" finally clicked into place for me. Does it make me a sick human being to think they are brilliant?

Posted by PostConsumer Reports at 11:26