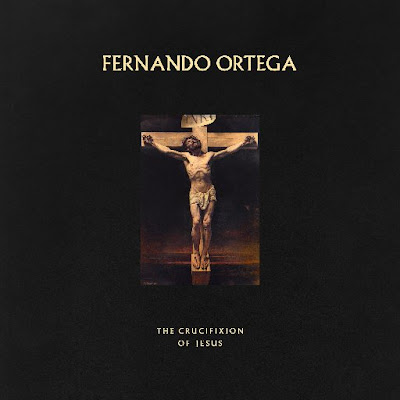 Last week I was able to interview Fernando Ortega for the PostConsumer Reports Podcast. This week I am featuring a review of his new album The Crucifixion of Jesus, which you can order at his website: www.fernandoortega.com. You can listen to our interview here:


Subscribe to the podcast on itunes or check out the podcast page to subscribe on Stitcher, Google Play, Tunein, and PocketCasts.

You can also stream/download the album on itunes, Amazon, or Spotify.

It's been six years since Fernando Ortega last released an album, and his new work The Crucifixion of Jesus finds him creating music in mainly the same vein as he has been for the past decade. And yet this new collection finds the New Mexican singer-songwriter beginning to paint on a much larger canvas. As we have come to expect from Ortega, this album features a gorgeous collection of hymn re-tunings and spiritual songs, but Ortega is now 60 and you can tell he feels mortality weighing on his bones.


So, with The Crucifixion of Jesus he is beginning what would seem to be the most ambitious project of his career: a multi-album work spanning the Holy Days and seasons of the Church calendar. He has begun with Holy Week and the death of Christ, but hopes to move on to the Resurrection, Pentecost, Ordinary Time, Advent, Christmas, Epiphany, and Lent.

And so Crucifixion is a zeroing in on the last week of Jesus' life, and it would be unfair to expect it to delve into other thematic and theological territory. We must think of the album as a presentation, mediation, and call to worship set in the context of Holy Week. Using Scripture and prayer book readings as markers to progress the narrative, the songs themselves follow these events in the week before Jesus' death:

—An introductory call to worship: "Blessed Be Our God
—The Triumphal Entry on Palm Sunday: "Prepare the Way, O Zion"
—The Cleansing of the Temple: "House of Prayer"
—The Last Supper and Christ's Words of Institution: "In My Father's Kingdom"
—Jesus and the Disciples Praying and Watching in the Garden of Gethsemane: "Stay With —Me Here" and "Your Will Be Done"
—Jesus's Trial and Torture: "O Great Love, O Love Beyond All Measure"
—The Cross...: "Ah, Holy Jesus, How Have You Offended", "My Song is Love Unknown"
—The Last Words of Christ and Psalm 22: "Psalm 22" and "Stricken, Smitten, and Afflicted"

I think it is worth noting what a counter-cultural statement this album is. We are used to Christmas albums and Easter plays, but we are not used to dwelling so much in the lead up to Christ's death, his trial, and his crucifixion. We are typically fine with those things so long as they resolve into the glory and victory of his resurrection. And yet our faith is founded on the cross and those of us who attend "liturgical" churches or who celebrate the Eucharist more frequently, always find ourselves in that upper room with the disciples listening to Christ announce those perplexing and world-shattering words: "This is my body...This is my blood..." In other words, the paradox of the Christian faith is that we are always in Holy Week, always in the pain of Good Friday, even as we are always in the new world of the resurrection.

The album follows an "Advent Lessons and Carols" structure with the readings interspersed amongst the "carols" and thus it would work well as a complete service or concert unto itself, much like a cantata. One of the more noteworthy aspects of the album is just exactly what Ortega is doing with the songs. To start with, his own compositions draw from Scriptures rarely set to music, most notably on "House of Prayer", "My Father's Kingdom", "Stay With Me Here", and "Your Will Be Done". These types of songs are incredibly tricky to pull off and Scripture texts are not always poetically compelling or rhythmically compliant. But Ortega makes the texts feel like a natural fit for his music through intentional repetition of the lyrics and consciously simple vocal lines. Next, what he does with a number of his hymns is also noteworthy. As a card carrying member (and possibly even the president?) of the "re-tuned hymns" movement it is certainly nothing new to set a new tune to old lyrics, but again, it is an incredibly tricky feat to pull off and get right. So, for "Ah Holy Jesus How Have You Offended" he manages to write a new melody that already feels ancient and timeless, and for "My Song is Love Unknown”, along with another new melody he attaches a Western shuffle beat, a great guitar solo, and makes every even numbered verses into a chorus, making the hymn feel like an entirely new work. The ease with which Ortega pulls off these two songwriting skills is amazing.


Instrumentally, the album utilizes Ortega's by now well-established instrumental staples: piano, a female background vocalist, cello, violin, a periodic guitar, often unconventional percussion, and of course his own somber and soothing voice. Although Ortega recorded most of his own tracks alone in his own home, the album mostly feels like an ensemble record with a cohesive band who knows how to compliment each other by playing off each other's cues. There are however some surprising sounds on this album for Ortega, notably the presence of more electric guitar and the use of oboe, both of which are simply beautiful. I also really like the way Ortega utilizes the strings—they feel like part of his band rather than a hired out studio ensemble.

The songs juxtapose between longer hymns and cyclical meditative songs and then short songs that only dwell in a single moment of Christ's life. Though the scope of the album is immense in subject matter, the songs themselves feel brisk and airy. As a work it almost feels short, and thus very much like a part 1 of a larger project. Let's hope and pray he gets to The Resurrection of Christ by next spring.

The album is powerfully suited for both corporate worship and personal devotion, and if you are curious, the stand out tracks I might one day teach my congregation are:   "Blessed Be Our God", "Prepare the Way O Zion", "In My Father's Kingdom", "O Great Love, O Love Beyond All Measure" and "My Song is Love Unknown". "Ah Holy Jesus, How Have You Offended," is equally as excellent as those songs, by my congregation already knows it to another tune.

Something we might take all too for granted in a Fernando Ortega record is his own playing and singing. His musicianship is so consistently good t that it is too easy to pass it by, but make no mistake: his skill as a composer and performer is superb. He nearly always manages to pull off the incredible feat of being at once virtuosic and simple in his piano playing. Ortega is not a piano pounder like Elton John, Billy Joel, or Ben Folds. You can almost feel him going gently on the keys, playing with subtlety and wisdom, giving each song what it requires. Again, this means we might miss the genius of his playing, but listen close and you'll hear the nuance.

But it is almost as if Fernando wants us to forget he is there in order that we may instead be drawn into reflecting more deeply on the life and work of Christ, into this ancient, transcendent, and holy story. In this way The Crucifixion of Jesus succeeds as a triumph of beauty and meaning, one that will hopefully make a big impact on people’s lives.

Check below for related podcast episodes and articles on worship.

Related Articles:
The Best New Worship Music (according to PostConsumer Reports)
Is the Liturgy Too Elitist and Academic For "Normal" Christians?
How the Church Calendar can speak to modern people (if we allow it to)
Chasing the Ghosts of Worship Past—a worship leader's lament
Hymnals = Vinyl: The Case For and Against Hymnals in Worship
Worship Music Should Be Radically Contemporary

Posted by PostConsumer Reports at 09:06

I never miss the genius of his playing, or the Genius at the heart of his work. He never compromises for a moment.