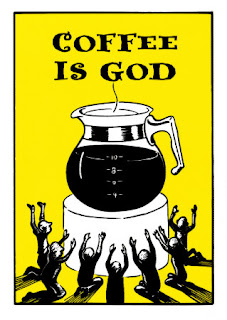 I went to a local coffee shop today to meet a friend. It was a typically hot day for this unusually oppressive summer, which meant that I wanted my drink cold. There I had an exchange that caught me quite off guard. It went something like this:

I looked up at the coffee shop menu and at the top it said “All of our coffees and espressos can be iced.” I decided this was what I wanted and approached the counter, ready to make my order.
Me: Yeah...can I have an iced espresso?
Barista: Do you mean an espresso with water poured over it and then with ice added to it? Said either as if that would be a silly choice or as if the he knew that really wasn’t what I wanted but that he was going to humor me anyway.
Me: Well, can it have milk on it instead?
Barista: Oh, he balked you mean an Americano!? He said pretentiously and then started laughing mockingly, looking to his co-worker barista wherein they both started laughing and exchanging sneering glances as if to say, “Can you believe this guy? Is he even worthy of our coffee?” [Which, by the way the Americano or Cafe Americano is not even an option on their menu, so how was I supposed what it was called without prior Coffee Education, and the description of which--if Wikipedia is to be believed--is different than the definition found here: http://en.wikipedia.org/wiki/Caffè_Americano and here:
http://coffeegeek.com/forums/espresso/general/378007]
Me: Hey man, I say because I happen to know these baristas through frequent visits how am I supposed to know this? You’ve got to serve the public, you can’t expect us to just know this stuff!
Barista: Yeah, yeah, alright, alright. Still kind of smirking
Me: You know, I feel like I walked into your church and I stood up when everyone was supposed tosit down and you guys are the collared priests just shaking your heads saying, “Oh these uncivilised heathens! When will they learn?
Barista: ...Oh, well, I thought we were laughing at you. Said with a twinkle in his eye and a lopsided smile knowing full well this was not the case.
I really felt humiliated and foolish, although I was not the one who looked like a fool. I came to their establish to purchase their product and I was derided for not knowing the proper terminology. It was a strange occurrence to me. Luckily, I knew the baristas well enough so I could (more than gently) rib them back, and hopefully shame them enough so that next time they will not treat another customer that way, especially a customer who does not know about their little coffee cult.
I like coffee, but I certainly do not know much about it. It is really only something I have started drinking in the last few years, and I am still more likely to associate it with that weird stuff my dad drunk every day in the morning when I was a kid. I remember when the only coffee available to anyone was Folgers, Tasters Choice, Maxwell House, NesCafe, and that Juan Valdez guy. I remember when they started putting coffee grinders in the megamart grocery stores so that people could grind their own coffee in-store. I remember when the only Starbucks in town was at the Barnes & Noble, because something about our demographics was not right for a full-on Starbucks. Now there are seven in our area. I am 29 years old, so all this is to say that this is a really short time to have developed such a pretentious attitude towards a beverage that most people consume for solely functional purposes (i.e., a morning [or all day] pick-me-up).
It is one thing to become pretentious yourself, but an entirely different thing to expect the general public to know about, care about, and then hold those same pretentious views. Especially in such a short amount of time. Culture simply does not change that quickly. Essentially, making and consuming coffee is one of their hobbies and they just happen to get paid for it. Normal people do not expect the uninitiated to know the obscure details of their hobbies. A bicyclist does not expect people to know (or care!) about the differences between Shimano and SRAM components in their bike and guitarists know most people do not know the difference between Fenders and Les Pauls.
But this post is not really about coffee or even about me getting offended--it is about pretentiousness. You see, tonight while I was taking out the recycling I realized I have been just as pretentious as them--sometimes outwardly to other people but most of the time just in my own mind. I am very easily pretentious about my tastes in music, literature, film, and my one favorite sport (tennis), as well as in spiritual and religious matters, “being green,” and how I am raising my kids. Essentially, I think we are all pretentious jerks who think everyone else are ignorant Philistines. I guess I am going the Sufjan Stevens route, a la “John Wayne Gacy, Jr.,” saying “And in my best behavior, I am really just like them...”
So, I am not offended by this altercation (at least not anymore), but have really just been made tired by a faulty tendency so prevalent to the human condition--a tendency I have dealt out to others just as much as I have had it dealt to me.
So let's end on a lofty note:
...I want to become a child again...to be full of wonder and honest hunger for all that is good and beautiful and true...to not know what I do not know...
----------------------------------------
One more thing: I did happen upon this blog entry and found it truly cathartic to read: http://www.howdoesthattaste.com/2010/01/are-you-coffee-snob.html
Posted by PostConsumer Reports at 22:45