The Return of Burlap to Cashmere 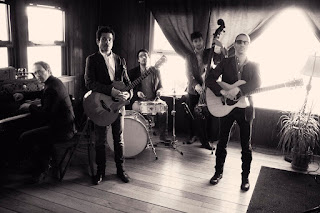 Burlap to Cashmere released a new album a few days ago, which is something I am very excited about. I guess I have been excited about it for about 12 years now, since it has been 13 years since they released their first (and previously only) album, Anybody Out There. I remember first hearing about Burlap to Cashmere on my local Christian radio station when the music programming director talked about a visit he made to Nashville during GMA week (http://www.gospelmusic.org/), and they played during a new artist showcase that totally blew him away. You do not often hear descriptions like these, especially not in the Christian music world, so I made sure to keep my eye out (ear open?) for when I might actually get to hear them myself.

A few months later I found myself at my then annual pilgrimage to JPUSA’s 1998 Cornerstone Music Festival (a pilgrimage that has long since died out with the advent of rising ticket prices, marital responsibilities, very young children, and closing of the festival itself), and wondered if “Burlap to Cashmere” was the same band I had heard raved about a few months earlier when I saw they were playing a late night Gallery Stage show. So, I made my way underneath the tent that lies just beyond the food court and portable Hyvee grocery store and waited.

When the music started I can honestly say what I heard was entirely new to my ears. Here is how my 16 year old self would have described it: Folksy, in that they only used acoustic guitars, but explosive, in that I had never heard music played with that much energy, that much intensity. Whether it was acoustic strumming, finger-picking, or soloing, I had never witnessed guitars being played that fast. They sung about matters of faith in either a matter of fact or completely abstract sort of way, but the lyrics were placed in a musical setting entirely unique to the CCM (Contemporary Christian Music) world. I now know their music was equally influenced by Stephen Delopoulos’ and Johnny Philippidis’ Greek Heritage and love of 70’s folkster music, none more so than Cat Stevens. To put it in its box, it was world music blended with Americana folk music (I know Stevens is British, by the way). But the energy they brought to the songs…the energy made this concert not just another set we all judged from afar but a musical experience into which we all entered.

I knew something was up when a few songs into their set I looked to my left and saw the members from both Delirious (who had also just played their first Cornerstone) and Audio Adrenaline carrying the same awestruck look on their faces that everyone else had. After that night, I ended up seeing Burlap to Cashmere two more times, once at another Cornerstone and the other at the Wolftrap Ampitheater in Virginia when they were touring with Michael W. Smith and my brother was kind enough to buy me tickets when we were out visiting his family. Once their album came out they had a few pretty big hits on Christian radio with "Anybody Out There?," "Basic Instructions," and "Treasures in Heaven," but after a few years everything grew quiet as far as Burlap to Cashmere was concerned.

At the time they were one of the few “Christian” artists I could point to that carried both musical and lyrical integrity and who contained a sound all their own. I mean, what secular artist could anyone claim they were an inferior derivative of? But nothing came of them. Their record label Squint (run by the iconic and enigmatic Steve Taylor, who is currently finishing up the Blue Like Jazz movie) folded along with the band itself and Stephen Delopoulos put out a few excellent solo records, which has somewhat held us fans at bay. There were one off shows with Delopoulos and Philippidis and rumors of a full return, but nothing ever came of it until a few months ago when The Internet told me the band had truly reunited, they were actually recording a new LP, and they had posted a little in-studio preview video on their website to prove it.

And now here they are again, with a new record (on a subsidiary of a big old record label, no less) that I cannot wait to hear. However, the main reason I am writing this post is not to draw attention to one of my favorite long lost and now recently found bands, but to instead ask one of the perennial questions floating around my head regarding artists, which is: What did you do when the band broke up? In other words, what exactly have you been doing the last decade or so? How have you made ends meet? How do you pay your rent/mortgage and how have you provided for your (I assume) growing families? And on top of this, how was your life in such a state that you were able to stop whatever it was that you were doing—both jobs and family life—to take time once again--now that the freedoms of adolescence have long since evaporated--to make an album, promote it, and tour it?

This issue is something I have long worried about. I am deeply concerned about what happens to people when something they have invested their whole lives in has come to an end. Whether it is someone’s business, a retiring athlete, or a band that breaks up, it really saddens me to think about what they will do once it is all over.

The town my mom lives in used to have a Kmart. For years, when it was still there, every time I would drive by the dwindling cars in the parking lot or go inside and see its ever shrinking stock of goods I would make sure to say “Awww….poor Kmart,” in an Eeyore like tone—half joking but also truly remorseful knowing that it would one day close. It did close and still stands empty to this day (UPDATE: something called a BIG R has moved into the space). Before it closed, I went there a few times to buy things on closeout prices and every time the same elderly lady who I assumed had worked there for years scanned my purchases and every time she remarked, “I just can’t believe it’s closing. I just don’t know what I’m going to do now.” “Yeah, I said,” imagining her going home to her lonely cats and quietly saying to myself “Aww….Kmart.”

It is strange but this truly makes me sad. Whenever I see a closed down business I get this sinking feeling and I feel deeply sorry for the people who have had to abandon their dreams. If I let myself, I start thinking of all the people who have had to stop doing what they love best or what gave them the most fulfillment, whether for lack of money, ensuing age, or an endless assort of conflicts and trials put in their way. I do not feel sorry for truly successful people when they have had to quit, for they are one of the few who actually made it and they should be thankful for the time given them to do what they love. No, it is for the ones who almost made it or kind of made it, and on the music front Burlap to Cashmere is a prime example. I often feel sorry for a band like Sixpence None the Richer, who also have not put out nearly as many albums as they should have, but at least they had a song like “Kiss Me,” which gave them a great deal of fame and at least Matt Slocum (the songwriter) can soak in the monthly royalty checks from getting a constant rotation in department stores. But then again, what about Leigh Nash (the lead singer) or the rest of the band--how have they gotten by for all these years?

For the most, part I know these questions will never get answered because there is just too many people to keep track of. Sure, you hear of the lead guitarist from that one band becoming a successful producer or that one line backer from that one team becoming a coach for some team somewhere, but what about that bass player from the one band that put out three albums in the 90’s? Whatever happened to him? I am so worried about him. I hope he is OK. Really I do. [Sinking feeling]

And please go buy Burplap to Cashmere's new record so that they have enough money to make another record and so that they are able to pay their rent, and get milk for their kids!
_______________________________
Related Posts:
5 Things I'm Wondering About the New Steve Taylor Album Goliath
When Will the Christian Music Industry Get Its Act Together

Posted by PostConsumer Reports at 21:26

Oh I definitely will. I LOVE BTC. I think that was your influence. But I still listen to that cd. Can't wait to hear the new release. :)