Why I Hate Sufjan Stevens: Reasons #3-6 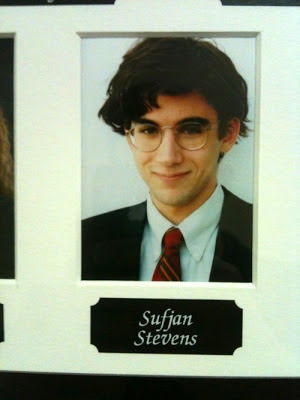 On November 13, 2012 (NEXT WEEK!) Sufjan Stevens will release his second collection of Christmas recordings entitled Silver & Gold, so I figured it was finally time for me to tell the world why I hate him so much. Last week I gave my introductory thoughts and reasons #1 and #2. Here are reasons #3-6.  I invite you to COME ON! AND FEEL THE HATE!

Why I Hate Sufjan Stevens: Reason #3
Playing a Multitudinous Amount of Instruments Himself and Playing Them Well [mostly] (including marimba!)

Just in case you did not know, Sufjan Stevens can play the guitar. And the banjo.  And the piano. And the oboe, and the trumpet, and recorders, and the xylophone, and the marimba, and the vibraphone, and the drums, and the sitar, and the English horn, and a multitude of keyboard instruments, and he can even do all his own digital programming tomfoolery.  I hate you Sufjan Stevens! I hate you!  And even though some of his instrumentation can sound a bit jangly and rough around the edges (I mostly thinking early on in his career, like on Michigan) he usually pulls it off well.  And what really makes the hate rise in me is that he is an excellent excellent piano player.  As far as I know he played all of the piano on his orchestral work The BQE and if you can listen all the way through it, the piano interlude to this song:


I mean, come on!  He's like Prince, but with less funk and uncomfortable innuendo (BTW--oddly enough, it appears one of the songs on the new Christmas album is a Prince cover.  The only upper hand I have got on Sufjan is that I do not think he has had any hammered dulcimer on his albums yet--although I bet he can play it proficiently!

Why I Hate Sufjan Stevens: Reason #4
Layering So Many Musical Ideas on top of each other.

Sufjan often tends to take an 'everything but the kitchen sink' approach with his music, where not only are there a ton of musical instruments being played on a given song, but there are also a ton of musical ideas overlapping each other, often all at once.  What this tells me is that when he conceives a song there is just an overflow of melodies and harmonies and rhythms going on in his mind.  I could list examples of songs where he does this layering well, but there is just too many of them (ok, just check out this one, as an example).
Despite the surplus of musical ideas, he also does quiet songs well too (like this one), which could also be another reason why I hate him!  Anyway, how many melodies and countermelodies does a guy need to make a song great?

With the advent of the ipod songs do not need to be able to fit onto a CD or onto one side of a cassette tape or LP anymore and Sufjan wants to make you aware of this fact by recording very very long songs.  Sometimes these are songs with multiple movements ("Impossible Soul," "Detroit, Lift Up Your Weary Head! (Rebuild! Restore! Reconsider!)," "Majesty Snowbird," "You Are the Blood," and “Come On! Feel the Illinoise! (Part I: The World’s Columbian Exposition — Part II: Carl Sandburg Visits Me in a Dream") and sometimes these are ten minute variations on the same musical theme ("Djohariah" [although there technically is a second movement], "All Delighted People," and the newly released "Christmas Unicorn" and "The Child With a Star on His Head"
Sufjan obviously thinks these are worth listening to (and most of the time they are) and he also must think people are going to actually sit and listen to these long tedious songs that often include lost of dissonance (this I have my doubts about).  Oh to have the luxury to be able to tax people's patience in this way.
(BTW--as reason #5 demonstrates, another reason to hate Sufjan could justifiably be "extraneously long song titles."

Posted by PostConsumer Reports at 21:18

I thought of you're blog post as I watched the Justice Delivers Its Death promo video about 15 times when it first came out.

One of the things on my hate list is his ability to release disappointing new music that is completely different than his previous music, only to have you hooked on it by the third or fourth listen. Maybe it's like pavlov's dog, and he can release anything; his fans would still grow to like it because they're expecting to.

I definitely have my frustrations with Silver & Gold. Vol. 7 seems like his weakest. I kinda wished he would have edited it down, but it kinda makes sense the way it is. My favorite original songs so far have been: Lumberjack Christmas, Christmas in the Room, The Child With the Star on His Head, Justice Delivers Its Death, and Christmas Unicorn.

I have bootlegged versions of Vol. 6 and 8, and in some respects, I think the original recordings were better. The were simpler, less messy.

I had to admit, that the box set had me a little creeped when I first opened it. I liked the Vol. 1-5 box set theme more than the Silver & Gold theme.

I totally agree with you about Vol 8. He TOTALLY messed with "Christmas in the Room" and "Child With the Star on His Head" and I think they are much worse b/c of it. Those are the best originals too. He's like George Lucas in the special editions of Star Wars--he's adding too much digital junk to everything. I only had a few songs from Vol. 6 but they didn't seem that different to me.

I agree with you about Vol. 7 as well. It's a mess. But yeah, it seems like that's what he wanted to give us.

All the originals you mentioned are the ones I like too. And yes, it's some crazy packaging. Sufjan has a twisted sense of humor. Again, thanks for reading.

In you are the Blood the Piano Cadenza is actually performed by a good friend of his who also does a lot of his string arranging. His name is Gabriel Kahane and I give him a huge shout out. He's a fantastic musician.

That is an amazing tidbit of info.
Thank you for sharing.

Sufjan Stevens is a musical God.