Lessons Learned From the Beatles (about music, art, fame, and otherwise) 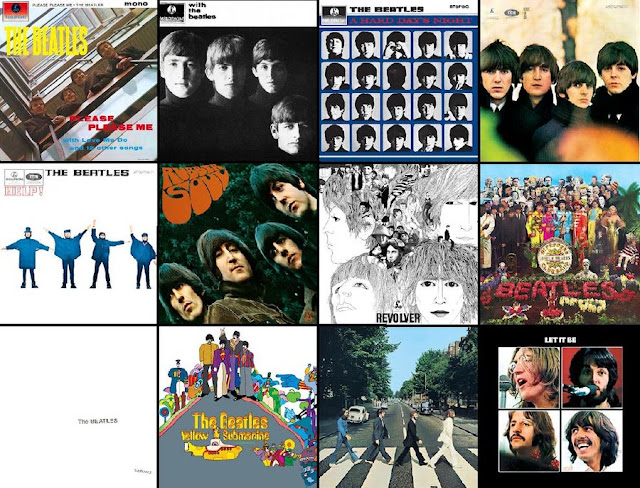 Over the past few months I have been listening to a lot Beatles' music.  As I have been re-listening to a lot of their work I have again been amazed at how excellent they were at their crafts of 1. songwriting, 2. recorded music, and 3. developing this modern idea that we call a "rock band."  As a result I have been thinking a lot about what it is that has made them so enigmatic and appealing for so long.  In some senses, I see the following statements as core values for any fledgling rock band that wants to get anywhere, but I also think there are some valuable principles that anyone in leadership (church, business, or otherwise) or the field of education can benefit from.

So here they are, the lessons I have learned from The Beatles:
(I dedicate this post to Robbie Augspurger, the man who introduced me to the mystique and complicated history of this band and who probably loves them a hundred times more than I do)

1. Write songs in different genres. It is a strength to have songs on an album that are completely different in genre, style, and subject matter (think of the musical diversity present on Revolver and The Beatles).

2. Sell out first and then go avant garde.  Essentially (after plunking away for years as a bar band) The Beatles joined the record company system, became a very conventional band that was sellable to the masses, created brilliant but formulaic pop music that won them millions of fans, and then using the freedom afforded them by all that public good will, made daring experimental pop music.

3. Always be evolving as an artist.  Actually, this is a bit of a myth.  One could easily say that The Beatles utterly transformed themselves musically speaking in the ten years (or so) that they were a band.  However, if you look at the post-Beatles output of each of the members their songwriting did not continue to evolve at such a staggering pace but could basically be said to have plateaued.  This does not mean their songwriting was bad but only that it did not change by the same leaps and bounds as it did from say 1966-69.  All the same, one of the lasting legacies of The Beatles is this expectation that artists should always be evolving into something greater, that they should always be challenging themselves to reach new heights artistically.  This expectation is a legacy (or should I say a shadow) all of the present day ‘important’ artists have to live under.

4. In evolving as an artist take what was old and make it new.  The Beatles were not coy about revealing their influences.  They freely admitted they essentially were trying to recapture the sound of the blues, rock & roll, crooner, and vaudevillian records they listened to growing up.  So, in basically every Beatles song you will hear a musical formula that was inspired by some kind of roots music, but at the same time you will hear them add something to or put a new twist on the old formula.  In other words, their evolutions were always homages to their influences.

5. Create myths about yourselves, or create a mysterious public image for yourself, next confound the press and the public by denying that you have done so at all, and then say that anyone can believe anything they want about you but that does not make it true.  John Lennon was a pro at creating this kind of spectacle (and maybe Paul was too) and the end result of this kind of perplexing behavior is that it makes you absolutely fascinating to people, which in turn leaves them always wanting more.

6. Surprise your listeners/audience. (this is basically a combination of 1-5)

8. Spend years and countless hours honing your craft before you try to say or do something original.  For all their craziness The Beatles were incredibly hard workers.  They slonked it out in the clubs and bars in Britain and Germany playing primarily cover tunes.  This why they are often called a "working class" or "blue-collar" band.  It was only after they had perfected their craft and learned the great works of those who had gone before them that they were able to leave their own legacy.

9. Write lots of songs that contain peoples’ names in the title, because even though they might be referring to a specific person they end up becoming the universal anthems for multiple generations ("Hey Jude, don’t make it sad…").

10. Collaborate. Be interdependent.  Despite all their interpersonal dysfunctions The Beatles were at their best when they were each contributing to the band equally and using their own strengths.  And do not forget about the role George Martin played in it all as well (along with a number of recording engineers as well as their manager Brian Epstein).  When we think of The Beatles we tend to think of these big personalities who were distinct from each other and acted in opposition from each other, probably because we love to idolize famous people and we are drawn to the controversy more than the harmony.  But think about it: The Beatles were a group of friends who were together to accomplish an overarching common purpose: make great music. And then think about all that music: a vast vast majority of it was an interdependent group creation.  My contention is that in order to make something that is truly great we must work within a team (and I say this as someone who is entirely a lone wolf).

11. After gaining world-wide fame find a way to keep releasing the same material in different formats and ‘lost’ material every few years just to keep fans hungry. For example, the anthologies, Let it Be...Naked, and recent release of the Magical Mystery Tour film.  Now if only they would release the Let it Be film…

12. Keep it short.  Although there are some long Beatles songs they usually pack all their brilliant ideas into a quick 2-4 minutes.  They really understood the economy of time as well as their listeners’ patience.  Many times they only incorporated a certain melodic idea into a song once or twice.  (Sufjan Stevens beware! And yeah, Pink Floyd, I’m looking at you too.

13. As a rock band, even if you fail at other ventures (e.g., directing your own movie in Magical Mystery Tour or setting up your own record company and music store), no one really cares if you keep cranking out great music.

14. Make art that appeals to both adults and children. Pixar animation is the king of appealing to both adults and kids for the movies, but I would say The Beatles are the kings of doing it in music. Here's how they did it: 1. be childlike but not childish (or simple but not simplistic) both lyrically and musically, 2. write catchy hooks, 3. Use lots of attention grabbing imagery in your lyrics, 4. Incorporate lots of fun sounds into your music. Many of these characteristics can be found in the songs "The Ballad of Bungalow Bill", "Piggies," "Strawberry Fields Forever," "Here Comes the Sun," "Octopus' Garden," and many more.

15. Little kids tend to like Paul’s songs the most (“Blackbird”, “Hello Goodbye”, “Lady Madonna”, “O Bla Di O Bla Da”, “Birthday”, “Penny Lane” ), George’s next (“Here Comes The Sun”, “Piggies”), and John’s songs almost not at all (as far as later period Beatles goes they are all just a bit too twisted).

16. No amount of innovation or experimentation is a replacement for good musical ideas.  Sure, experiment all you want, but will people want to listen to it again and again for years to come? (Again, Sufjan beware!)  It would seem the best way to experiment artistically is to embed it in a form that is appealing and familiar to people.  The same could be said for lyrical experimentation as well ("goo goo ga joob!"  "oh yea, well o bla di o bla da bra!").

17. Take a break and get away from it all so that you are freed up to write even more.  I would not have gone to India to sit under some guru like they did, but there was actually a lot of wisdom in taking time away from the busyness, chaos, and sadness of their lives in order to have a fresh approach when they started writing music again.

18. Leave a (relatively) short musical legacy and call it quits before the magic dies (The Rolling Stones and U2 beware!).

+++
And while you're at it, check out this incredibly cruel Ringo meme (to any Ringo-lovers out there, I am truly sorry!!)

Posted by PostConsumer Reports at 20:39