Art is Not Weight Lifting: Why the Beck vs. Beyonce Comparisons Are Unfair And Wrong (and lazy!)

What a crazy week it has been in the pop music world.


First Beck wins album of the year for Morning Phase at the 2015 Grammy's, shockingly (to many? to some?) beating out Beyonce's self-titled epic surprise album from late in 2013.

As Beck walks up to the stage Kayne West mock storms the stage (ironically reenacting his 2009 Taylor Moment). Beck is gracious. He tries to invite Kanye Back up for support. Beck also seems a little surprised that he had won.

But then it was apparent Kanye was not mocking at all, but that he had something important to say about "artistry" and the way awards like the Grammy's are...well, awarded to artists. You can read what he had to say in full here: Kanye Wasn't Kidding, Said Beck "Should Give His Award to Beyonce"
While I always appreciate any attempt to cut through the internet noise when something like this happens, did I read correctly when you said in one paragraph that the Academy "Definitely" made a mistake in giving the award to Beck, and then in the very next paragraph you said that you haven't even heard "Morning Phase"? Doesn't it seem like you should withhold judgment until you've at least listened to the album? For instance, I've only heard a couple of songs off of Beyonce's album, and for that reason I don't feel qualified to weigh in on whether this was the right choice. I agree that Kanye's MBDTF was flat-out robbed. And I think Beck would totally sing lyrics like the ones on the left (at least back in his funkier days he would). I saw him in concert once and he led the crowd in a five-minute call-and-response where we simply said "Sergio Valente" and "Ooo La La Sassoon." Odelay-era Beck was the best.
Of course Kanye's statement to Beck is hyperbole, That is the point of hyperbole. You say something outrageous in order to make a point. Does Kanye really want Beck to give his award to Beyonce? Probably, but he also probably does not really expect him to do so. What Kanye wants even more is for true artistic achievements to be recognized by the Academy, and even though he did not make it explicit, and even though he claims to deny it in this interview with Ryan Seacrest, what he also means to say is black artists have continually been slighted for the more prestigious awards at the Grammy's.

Make no mistake: Kanye was not specifically addressing Beck, though it might have seemed so on the surface. Instead he was addressing an overarching system he deems to be unjust.

Just take a look at the history of Album of the Year Grammy winners. Despite continually selling at the top of the (ever dwindling) charts there is a relative dearth of rap, R&B, jazz, and dance artist winners of Album of the Year. Yes, there was Herbie Hancock (a truly odd but wonderful choice), Ray Charles (an obvious legacy nod, with Charles dying the year before), OutKast, and Lauryn Hill (two obviously deserving winners), but in the last 20 years those are the only black artists to have won (Whitney Houston won in 1994). I would be remiss to fail to mention Carlos Santana and Norah Jones, also best album winners, are people of color as well.

But there is a history here, especially with Kanye himself being snubbed by the Grammy's or in being given token Grammy's (i.e., awarded the trophy in less significant categories), as these articles point out:

Grammy's Fallout: The Subtle Snubbing of Kanye.
and
Beyonce's Shocking Snub Is Another Reminder The Grammy's Don't Care About Black People

Really, 2010's My Beautiful Dark Twisted Fantasy not even being nominated let alone wining Album of the Year is like Quentin Tarantino's Pulp Fiction not winning Best Picture at the Oscar's, which it did not (it lost to Forrest Gump). As the years go on, reflecting on both Tarantino's and West's groundbreaking work, we realize more and more what huge mistakes those were.

But I digress. After the Grammy's Beck also had some more things to say as well, noting that even though he does not think he should have to give his Grammy to Beyonce, he does think she was utterly deserving of the award ("Come on! She's Beyonce!") and he has nothing but laudatory and awed things to say about Kanye's "genius."

So, Beck was gracious, Kanye had some important things to say that deserve to be heard, and Beyonce has been (to my knowledge) silent.

But then the internet did what the internet does. Things got nasty. People started comparing Beck's work and "artistry" to Beyonce's and Kanye's.

Well, all this made me mad and frustrated, especially as someone who takes art seriously and is moved deeply by art, and also after Beck himself was signaling for everyone to chill out.

Why did these nasty memes have to appear?: 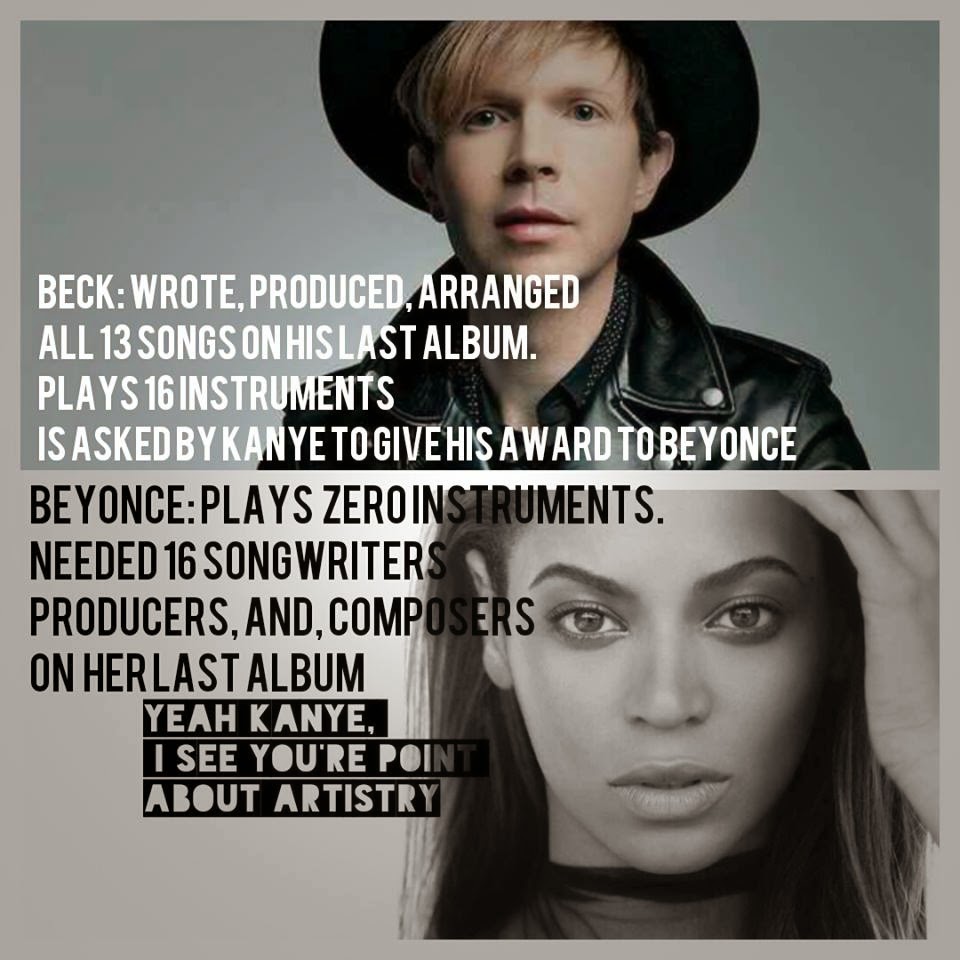 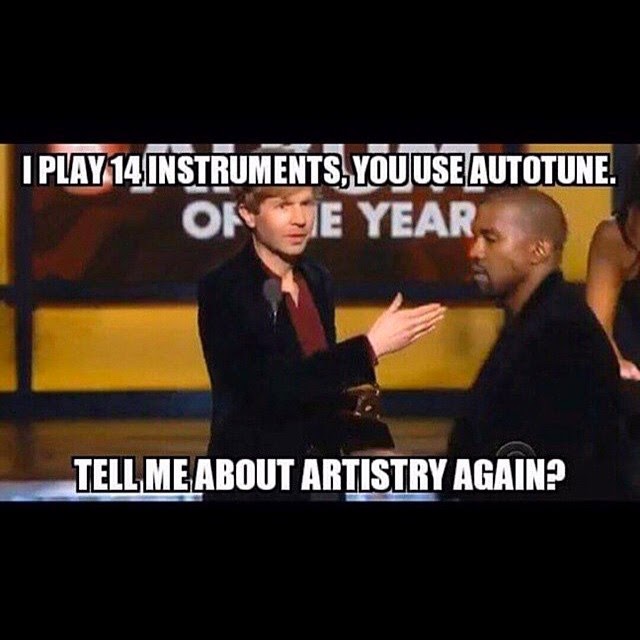 And then this "article" comparing the work of Beck and Beyonce?
5 Reasons Why Beck Beat Beyonce

And in seeing this, everyone feels the need to post these snarky memes in triumphant hubristic pride. Well, I guess your words and images mashup really took away all Kanye and Beyonce have accomplished in their careers. You really reduced them to nothing there.

But have they even listened to their albums? Have they heard what is on there?

So, here now are a few things that really irk me about the current need to ridicule the work of Beyonce and Kanye:
1. Art is not weightlifting
These two memes in particular I find utterly ridiculous: 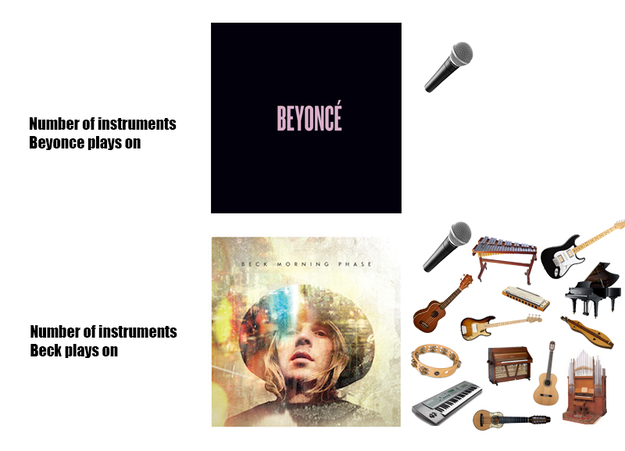 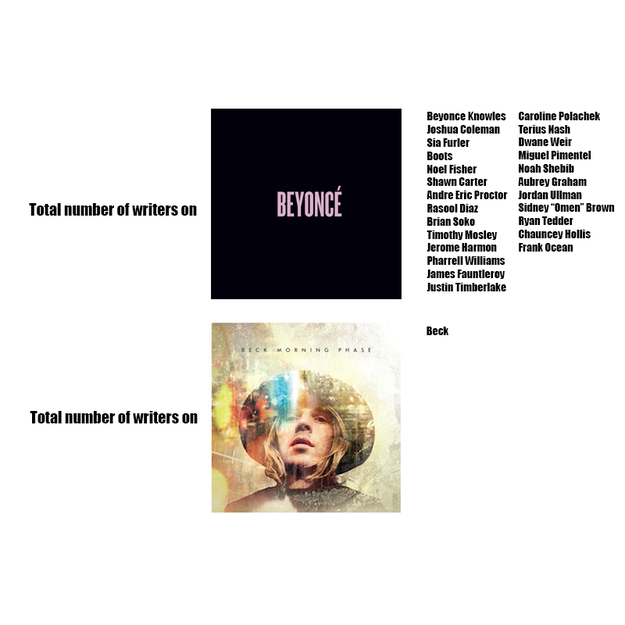 Making art is not quantifiable like some kind of athletic competition. Essentially, those two images are trying to communicate one thing: "See! Look how much better of an artist Beck is than Beyonce. See! He can totally lift more weight than her. She can't even like, lift anything! Look at her! She needs all that help. That's not lifting! She's not a real weightlifter, erhem...artist!"

But this is not what art is about. People's experience of art varies according to who they are and where they are at in their lives. For that reason, I am perfectly fine with Beck winning the Album of the Year. The academy decided what the academy decided. Do I think it was a mistake? Probably. Many reviews call Morning Phase a great album but not Beck's best, whereas numerous reviews cite Beyonce as Ms. Knowles' crowning achievement. (sidenote: with the award it would appear Beck is living his equivalent Martin Scorcese Best Picture Oscar Moment, as this is another legacy award move).

Besides, in relation to the co-writers image above, even Beck brought his whole team up on stage to acknowledge Morning phase was a team effort. So let me be clear: I think a best album award acknowledges what the work is as a whole and not only the work of the sole artist on the title. A best album nod also acknowledges what a work itself means in the general culture, Beyonce's album meant a whole lot more to a lot more people than Beck's work this past year--and that's to take nothing away from Beck as an artist or what he did on Morning Phase, which I have not even heard. Again, if this were weightlifting maybe Beyonce should have won since Beyonce sold over 2 million copies and Beck a paltry 330,000 (please note my sarcasm). Also, if the artist who plays the most instruments deserves to win album of the year, how come my man Sufjan has gotten no love from the Academy? He's the biggest weightlifter all!


2. Lazy lyrics comparison
Then there is this image: 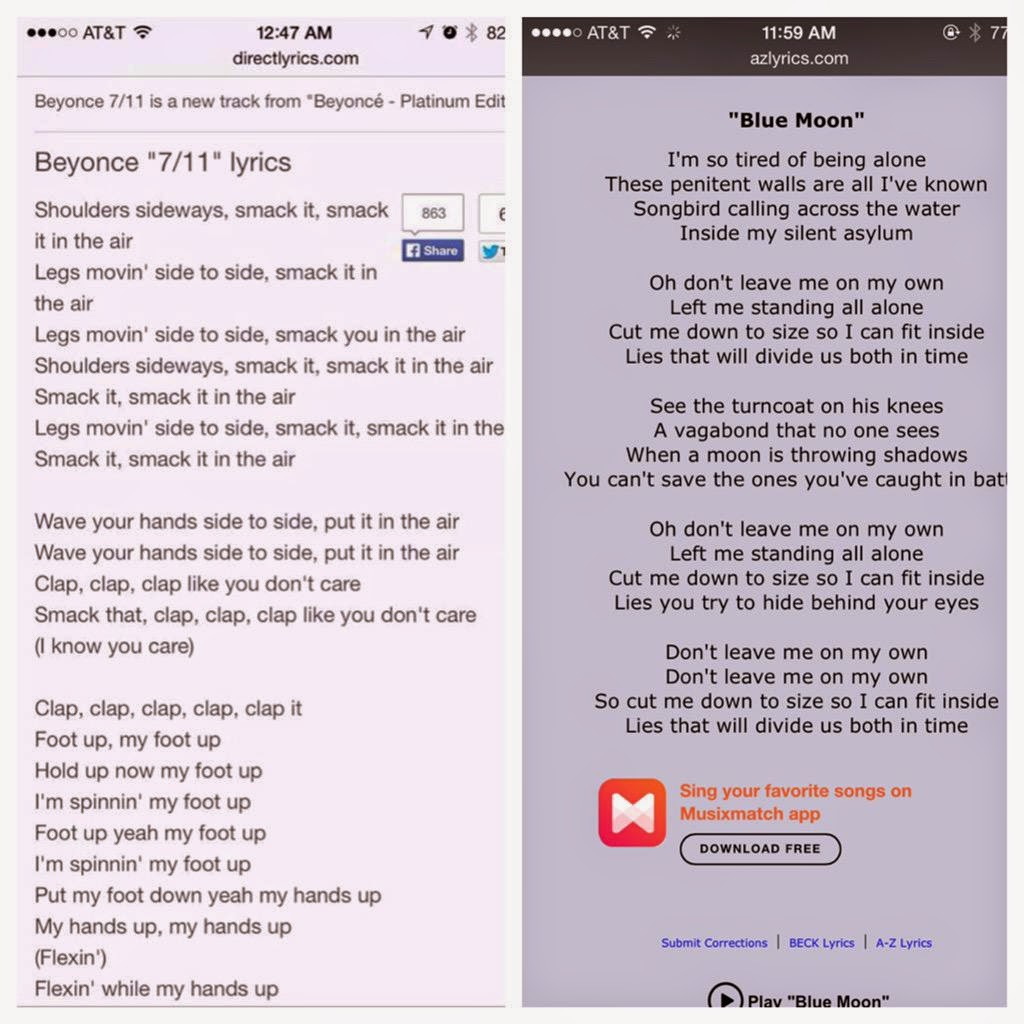 This particular lyrics comparison is totally unfair on numerous levels. First there are a TON of songs on Beyonce that are deep and complex or poetic and beautiful. Why did they take one of her banal songs and one of his deep songs? Unfair and lazy. Also, that particular Beyonce song fits her genre of music. The Beck of now, who is in a more introspective phase, would most likely not write a song with those kinds of lyrics anyway. It's a fun dance song, and doesn't mean her work isn't worthy of the award. And finally, and perhaps most unfairly "7/11" was not even on the original version of the album but on the reissue which contained a number of extra songs. Lazylazylazy.

3. Not all genres of music are created the same way
As a genre of music hip hop and R&B are much more (to my knowledge) collaborative, synergistic, and in the moment than other kinds of music. Or at least they are on a larger scale, hence all the co-writers on Beyonce's (and Kanye's) songs. In hip hop it is assumed that multiple people will contribute to the creation of a song: Someone supplies beats, another the hook, they have a guest MC on the second verse, someone contributes and obscure sample, someone lays down a keyboard or guitar part, and on and on. But none of this should take away from the sum total artistic achievement, the end result, which is what we hear and experience. To my knowledge, none of those co-writers were coerced into contributing to Beyonce's project. They wanted to be there and collaborate with her to make the greatest work they knew how.

I get that hip hop is not for everybody. Fine. But what I am growing weary of is people's disrespect towards it: "oh, it's just words", "oh, it's the same beat over and over again", "Do they even play instruments?" All I can say is there is so much happening in hip hop and R&B. Please, take some time to really listen to it.


Finally
And if you think this week is really not all that crazy, well, make sure you listen to that Kanye interview above or go read this.
Apparently Kanye might be working with Ms. Swift. How's that for a twist?

I am really starting to wonder when white people are going to get it. Famous white musicians love, respect, and want to work with Kanye. To them he is not an ignorant, reactionary, wannabee: he is the man to work with, a peer, and a consummate artist:
Beck
Justin Vernon (of Bon Iver)
Rick Rubin
Paul McCartney
Chris Martin
Adam Levine
Mike Dean

________________
Related Articles
Kanye Doesn't Owe Us Anything
The Uncomfortable Ethnic Envy of White Americans
The Racism of Arrested Development
Posted by PostConsumer Reports at 16:09

Wow, that is the longest I've heard anyone cry about something without hardly a valid argument. Of course the internet gets nasty, and the first came from a generation who grew up without an understanding of art, but rather an understanding of instant tweeting stupid comments like, "What's a Beck and why does it have Beyonce's grammy?" Most Beck fans are also fans of other hiphop and all kinds of genres, like myself. Most Beck fans also DISREGARD Beyonce, they don't go out of their way to disrespect her. Beyonce freaks straight up shit all over Beck online within minutes of the Grammy win, and you are crying over the minor retorts to that. Believing Beyonce's album deserves the Grammy over Beck's masterpiece is asinine; good luck with your blog, which I only found because I was searching for the awesome Scorsese quote.

she has a strong personality, i admire what she has done.