The Healing Power of Comedy 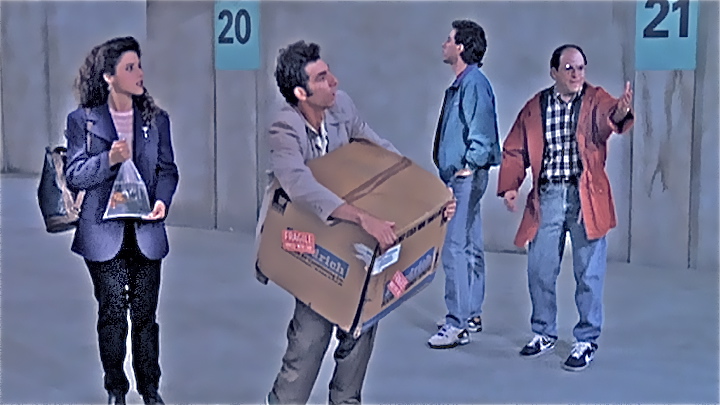 Growing up for me was pretty rough.

Yes, I am a white male and middle class, and I grew up a conservative Christian in peaceful, rural, Midwest America (in other words, everything was "easy" for me!), but everyday of my life, from the time I was cognitively aware until my early twenties, was lived in a state of constant fear.

My parents, you see, fought continuously. Everyday was lived in an everpresent paranoia of when my father would come home how much my parents would yell at each other when he came in the house. My father, who never quite matured beyond adolescence emotionally or intellectually, was a fomenting ball of rage, a spiderwebbed network of land mines around which everyone's delicate stepping was futile: no matter you path chose he was going to explode over something, leaving body parts strewn about the battlefield.

He never abused us physically, but his constant yelling cut us to the core, my mom taking the brunt of most of it in an attempt to protect me and my older brothers, who were mostly out of the house by the time I reached adolescence. Whatever deep anguish from his own abusive upbringing caused him to be the remnant of a person who was compelled to control every aspect of his life by screaming at those closest to him, I only heard about through my mother's conjecture of the obscured past. Nonetheless, it was clear nothing we could ever do was good enough. Our infractions against his inscrutable core standards were legion: My mom did not make enough money, she talked on the phone too much, and none of us could ever, ever keep the house clean enough.

It was a constant struggle to please Him Who Could Not Be Pleased. I cannot tell you how many times I was yelled at to not wear white socks in the house because the lint from the socks showed up in the carpet. I also cannot tell you how many times my dad frantically and methodically worked his way through our house searching for and then picking up every single piece of white lint he could find, storing them in his hand and sometimes in his cheeks like a rabid chipmunk until he could throw them away. I have images burned into my memory of my naked or near naked father, bent on hands and knees, crawling around our house looking for lint, his eyes aglow with a rage toward his son who would dare to wear white socks. I did this to him, the eyes told me. I was the reason he was forced into this position and not some kind of psychotic unchecked mania to have his world perfect at all costs.

I just wanted my father to go away. I longed for days when he would not come home. Knowing his oppressive shroud would not hang over us for even one day was liberating. Eventually, in my early 20's, my parents would get a divorce. People would often ask "How are you doing with the divorce? Is it hard?" To which I would declare "No, it's great! I love not having my father around!" The irony of a good Christian kid wholeheartedly rejoicing in the tragedy of his parents' divorce.

But to back up, somewhere in the mid to late 90's I realized something:
My mom, my older brother, and I were watching a lot of Seinfeld.

The non-situation television comedy Seinfeld had become part of our daily routine, from watching it at 6:30 p.m. through syndication after the local news, to anticipating new episodes every Thursday night on NBC's "Must See TV". At one point my mom acknowledged our new-found tradition out loud: It's just nice to be able to laugh. Laughing is so important. 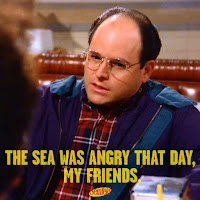 Something clicked in me: I realized laughter was a primary ingredient to a diet of mental and emotional sanity. As a family, we huddled together for safety around the protective shelter of Comedy. Our modus operandi was to continually seek out ways to laugh together as we waited out the storm experience of domestic turmoil.

I longed for Seinfeld. I needed Seinfeld. I lived with Seinfeld. During my teenage years there four profound safe havens which I sought out relentlessly: going to church and seeking God, being with my friends, listening to music, and watching Seinfeld.

Seinfeld got us through a lot. It was a daily respite from my father's madness and perhaps the in-built absurdity of the show, which pervades every episode, helped me to see my father was more of an absurdity to mock rather than a monster in which to fear. Perhaps I saw something of my father in the Soup Nazi, and perhaps I unconsciously rejoiced a bit too much when the character got his comeuppance as a direct result of his insanely instituted rules:

Every day I laughed and every day I began to heal a bit. It is no hyperbole to say comedy and humor played a huge part in bringing a kind of inner healing. As much as my father's tirades are burned into my memory, Seinfeld is also there, helping me to laugh, bringing healing to my emotional wounds. The show has been a bank from which to draw and I cannot tell you how many times I have referenced it in my life, bringing it up or quoting it when some equally absurd circumstance arose in real life. I do not know what would have happened to me if I had not been able to laugh. I will always be grateful to Jerry Seinfeld, Larry David, and anyone else who brought humor into my life. 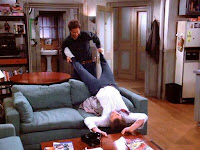 Laughter brings about change in people. Without going into the physiological data (which I have not looked into), I know laughter releases a person, giving them a moment of utter delight. When someone finds something funny they become unhinged for a moment, body and soul writhing in pure bliss. The ability to make someone laugh is a gift. Comedians are blessings to our world.

As I began to get older I would often find myself sharing darker things with people I thought I could trust. For example, I would express deeply held personal inadequacies or a twisted way of looking at the world. Sometimes my dark thoughts were met with mutual acknowledgment but oftentimes I was met with a kind of repulsion and moral judgment: Hey man, that was a bit too much. Maybe you shouldn't have shared that or Man, that was some dark stuff. Are you sure you don't need to seek some professional help? I was not safe to express how I secretly felt. It was made known to me that I had breeched social protocol.

Here again I found respite in comedy and laughter. What I came realize was standup comedians have regularly expressed their darkest most twisted thoughts in public through their standup acts. They are able to uncover what most disturbs us about ourselves and then help us laugh about it. They confess the most shameful thoughts through humor in the hopes of shedding light on some greater truth. For me, no one does this better than Louis C.K., as shown here in a segment delving into the extent to which we would seek revenge on someone to protect our children, even to the point of profusely hating another child.

Through a deeply disturbing anecdote Louis C.K. uncovers an innate human tendency, which is to make others feel pain because they first pained us. He does not make it explicit in his act but the potential of the "Jizanthapus" routine is it can actually help us move past our hatred and our tendency for unquenchable revenge by being able to laugh about it. Time and again standup comedians have gotten me through those moments of life where I want to scream "Aarghergaagagagerrrr!" in uncapped rage by getting me to laugh. I do not know where I would be without the ability to laugh at the most painful moments of life. Many times, the ability to laugh at something horrific is the most powerful way to have victory over it.

I am no fool and I know laughter is not the ultimate Healer, that that title and function belongs to God alone. But I do know laughter is a gift from God, a good gift from on high given to us for pleasure, to bring us closer to each other, and yes, even to bring us healing. God even makes jokes at various times in the Bible, and I have even taken my cues from the Scriptures, choosing to name one of my sons Isaac, meaning "he laughs" or simply "laughter". Being able to laugh is so important to me I literally wanted to gift it to my son as a generational blessing. That is how seriously I take laughter.

Laughter, however, can also be a diversion from truly addressing pain and dealing with life's issues. If someone's default is to continually crack a joke to avoid being serious then they are using humor to evade change and not be changed through it. Seinfeld and whatever kinds of television and comedy I seek out certainly are entertaining diversions, but my hope is they can be equally transformative.

Like all forms of art, comedy is able to take people to an emotional/spiritual/intellectual place unique to the form itself. Therefore, there is nothing superfluous about comedy. It is entirely fluous. We need comedy. It is the backbone of life (or at least one of the vertebrae). And to be honest, some of us need it more than others. I will fully include myself in that camp. Thank you Comedy. If I ever win an award you will be the first acknowledgment in my acceptance speech. 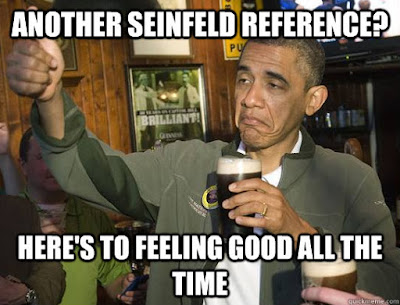