Let's Not Think About the Election! Let's Listen to Music!—Songs of Protest, Satire, & the Apocalypse 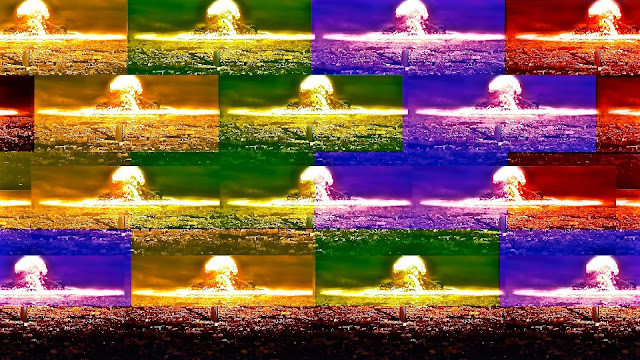 The current political season leaves bloggers like me with a dilemma. In what can only be viewed as the most polemicized election of our lifetime(s) do we even bother with bothering people about our piddly little blog posts? Personally, I have a few articles I've been working hard at for the past several weeks, but at the moment I hardly see any point in adding to the noise. I'd like my thoughts to actually get heard and considered, so why waste the effort of putting out another article when people's psyches are already over-saturated with the latest scandal or with attempting to sift through what is fact and fiction in the media's neverending truth manipulation game?

More than anything, I believe people are increasingly weary of the whole thing. We are tired of fighting each other. Tired of the lies and cover ups and conspicuous tactics of both sides. We've all been spun by the media's spin and I believe if we slow down enough we'll become horrified that often we are the ones doing the spinning ourselves. Having been spun we continue on spinning others... That is, if we are wounded as a nation, a lot of the wounds are self-inflicted...

With all this in mind, I have decided to hold off on my "important" articles for a couple of weeks (or more....We'll see where everything settles in the aftermath of the election). Instead, as a blogger, with something of a public forum for propagating the importance of art and faith in our culture, I am asking us to slow down and listen and ponder and take in some truth, beauty, and goodness. So...

Let's not think about the election! Let's listen to music!

This is a sincere call. If you happen to find yourself reading this article, please take a few moments to stop what you're doing and click play on the tracks below. I have curated a play list worthy of your consideration. May they work their way into your soul, embed themselves into your mind, and stir your strength into edifying action.

Today's list (Part 1 of 3):
Songs of Protest, Satire, & the Apocalypse
"Listen to the words of the prophet..." These are finger-pointing songs. These are songs that hurt us to our core. They catch us at our most hypocritical. At first we think they are singing about Someone Else, but if we keep on listening we come to find that no, they are singing about us too. Yes, we are culpable for the same crimes we accused others of committing. It would seem some repentance is in order.

Masters of War—Bob Dylan
This is perhaps Dylan at his most self-righteous. This song seems to be saying The Powers That Be are solely the ones to blame, and that is something I have difficulty accepting hook, line, and sinker. So, while I don't believe this song is the Whole Truth, I do believe it is a fire brand of more than partial truth. It was true in the 60's and it's still truth today (Some would say it's always been true...) SIDE-NOTE: I happen to think both of the prominent presidential candidates are war-mongers. They do not promote the way of Christ as laid out in the Sermon on the Mount. In fact, I have trouble seeing ANY president or world leader being able to live out the Sermon as a head of state. For this reason we should pray that God's mercy is able to fall on them, despite all of the horrible decisions they have to daily make.

Eve of Destruction—Barry McGuire
Some people are calling November 8 the day America "expires", the day it implodes, the day America dies. We'll see, we'll see. If it is though, then I suppose November 7th would have to be called the eve of destruction.


Great American Novel—Larry Norman
Larry Norman can also be more than a bit self-righteous. But "Great American Novel" is all about pointing fingers at those Other People Over There causing all the problems. Sometimes it just feels good. And sometimes you can are right to point out the wrongs others have committed. Here, Norman (mostly) nails it on the head.

Asleep in the Light—Keith Green
Speaking of pointing fingers...this one has them all pointing at both you and me. "You just lay back and keep soaking it in...Can't you see it's such sin?"

"There's something wrong in the heart of man. Take it from your heart, put it in your hand."
"You ain't foolin' nobody, with the lights out!"


Cash Cow—Steve Taylor
Steve Taylor excoriates. He eviscerates. He vivisects. Cutting right to the heart, Taylor knows who our true god is. He knows the idols of a past age aren't all that different from the idols we bow down to today. "I too was hypnotized, by those big cow eyes the last time I uttered those three little words "I deserve better!"


Political Science—Randy Newman
Randy Newman offers some sage advice to the rest of the world. They better get ready!


Bannerman—Steve Taylor
"He ain't gonna change the world, but he knows who can."

Related Articles
"We Know How the Story Ends": An Exploration of Narrative in Film
Music For Tough Times
Singing Over Our Children
Posted by PostConsumer Reports at 12:13